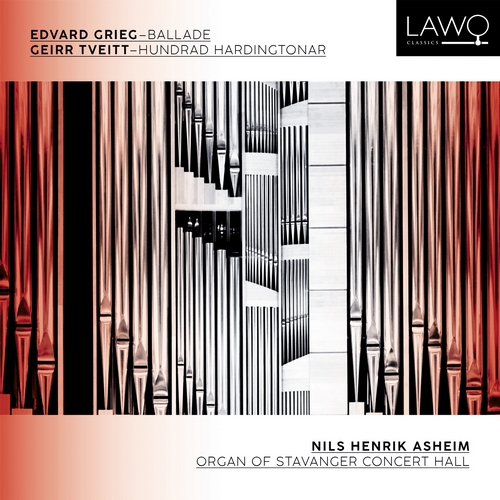 Do the best classical works have anything to gain from transcription to the organ? What new dimensions can be explored? Nils Henrik Asheim attempts to answer these questions and more by transferring both Edvard Grieg’s “Ballade” and Geirr Tveitt’s “Hundrad Hardingtonar” to the concert organ’s color palette. This project has become one that should garner considerable interest!

The “Ballade” is Grieg’s greatest work for solo piano. Through a magnificent, epic range of variations over a Norwegian folk song, he wrote away his grief over the loss of his parents, his marital problems, and his artistic stagnation. Asheim’s organ edition closely follows these restless mood changes, from the lyrical to the triumphant.

Geir Tveitt hit a gold mine when he combined folk tunes from Hardanger with his unique sense of harmony and orchestration. Asheim took inspiration from the lush spectrum of colors of the Hundrad Hardingtonar version for orchestra and pulled out the organ’s entire stock of creative sound combinations for the task. This selection counts 18 tunes, from the poignant “Vélkomne med Ara” to the hypnotic “Hardingol" to the mystical “Folgafodne fortél ingjenting."

After five years, Asheim believes that the instrument of the house is ripe for its first CD release. The 65-stop concert organ from Ryde & Berg in Fredrikstad has been praised for its organic, warm sound and is frequently used by performers from home and abroad.

Nils Henrik Asheim (born 1960) is a composer and organist, educated at The Norwegian Academy of Music in Oslo and at the Sweelinck Conservatory in Amsterdam. As a composer, he has written chamber works and orchestral works, as well as dramatic music and site-specific installations. He is especially known for his own personal improvisation style on the organ, and has twice received the Spellemannprisen (Norwegian Grammy Award), as well as a number of composition prizes. He has been employed as an organist at the Stavanger Concert Hall since 2012.
Recorded in Stavanger Concert Hall, 20-23 June 2017. Played on organ of Stavanger Concert Hall.