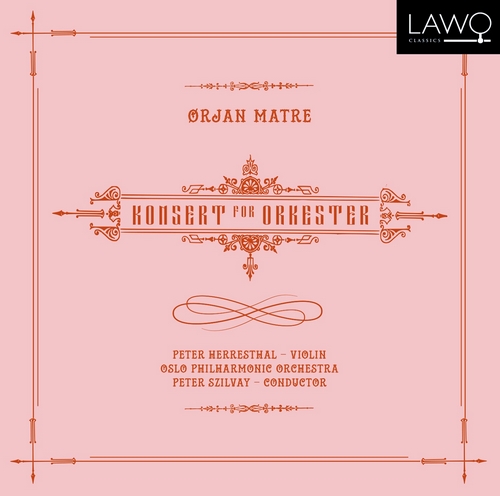 Konsert for orkester
2014
A CONCERT AS A LANDSCAPE

“Concerto for Orchestra” was commissioned by Oslo Philharmonic Orchestra and premiered in 2014 with Peter Szilvay as conductor and Peter Herresthal as violin soloist. The performance marked the end of Matre’s engagement as the season’s featured composer. “Concerto for Orchestra” is, as the title implies, a work for orchestra, but it is also a work about the orchestra.

As in a number of other works with the same title, all instrumental groups are properly explored and challenged. But in studying the names of the movements, one sees that the work explores overlapping meanings between “concert” and “concerto”. Very many orchestra concerts have the same structure: an overture, a solo concerto, an intermission and a symphony. “Concerto for Orchestra” follows this format. The overture presents material on which the rest of the piece is based; Herresthal plays extracts of Matre’s violin concerto, which also exists as an independent work; and the four movements “preSage revisited”, “Lament/Berceuse”, “Minuet” and “Finale” can be considered in this context as constituting a small symphony.

For the first performance of this work Matre approached the concerto form as a physical and social space. The recording attempts to communicate something of this experience via the medium of recorded album by using audience sound from Oslo Concert Hall and a recording of Arne Nordheim’s iconic pre-concert bell composition from the same hall.

Orjan Matre (b. 1979) studied composition at the Norwegian Academy of Music with Bjorn Kruse, Lasse Thoresen, Olav Anton Thommessen and Henrik Hellstenius. Matre was composer-in-residence with Kristiansand Symphony Orchestra for the 2006-2007 season, and he was Oslo Philharmonic Orchestra’s featured composer for its 2013-2014 season. He has distinguished himself as a distinct voice in Norwegian music and has, in a short time, been awarded high-profile commissions from leading musicians, ensembles and orchestras.
Recorded in Oslo Concert Hall, 15-19 May 2017. Played on GB Guadagnini violin from Milan, 1753.