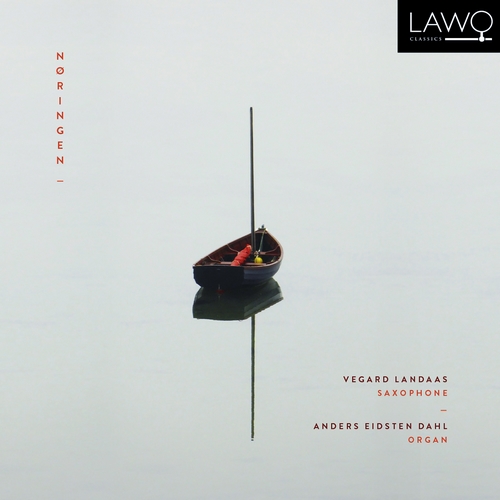 Sergei Rachmaninoff:
Vocalise
A common theme on this recording is traditional music. [“Noringen” is the name of a well-known 'gangar', a Norwegian traditional dance. It was especially popular in Vestlandet, the region along the Atlantic coast of southern Norway. The dance tune was played the morning after the wedding, when the guests were served food and drink, often after having danced all night. The word means nourishment (food).]

Saxophone and organ sound good together and complement each other well, yet little music has been written for this instrumental combination. For this reason, we are always looking for music that works well and often it is music written for instruments other than our own. Part of the effort of finding good music involves getting accomplished composers and arrangers to write for us. This recording is the concrete result of a concert tour we undertook in Slovakia during some hectic days in the summer of 2017. It features a broad range of music, and the quality, we feel, merits being presented on this album. In addition to the rehearsed repertoire, Bjorn Luksengard (b. 1956), church organist in Sande, Vestfold, sent us his arrangements and compositions during the tour. To some extent we developed the repertoire between the concerts and also tried out some of the music in concert situations.

Not long after returning to Norway, we met for several intense days of recording in Stromso Church in Drammen. It is one of Norway’s largest wooden churches and acquired its Mu?hleisen organ with 31 stops in 2011. The melodious organ and the church’s good acoustics gave us the conditions we were looking for.
Recorded in Stromso Church, Drammen, 9-10 August 2017. Played on Orgelbau Muhleisen GMBH, Stromso Kirke, Drammen, 31 / 11 Baujahr 2011