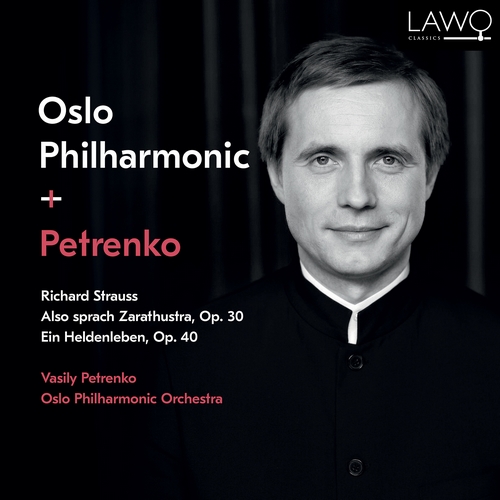 Also Sprach Zarathustra ('Thus Spake Zarathustra'), Op. 30
Ein Heldenleben (A Hero's Life), Op. 40
The Oslo Philharmonic and Vasily Petrenko present the first of a new series of recordings of Richard Strauss' orchestral music. This first release features the great tone poems “Also Sprach Zarathustra” and “Ein Heldenleben”, both works the Oslo Philharmonic has a long history of performing at home and abroad. Vasily Petrenko, chief conductor of the Oslo Philharmonic since 2013, exploits the special intensity of the orchestra's string sound and its magnificent wind and brass sections to full effect in this thrillingly virtuosic music.

Vasily Petrenko is one of the most significant and galvanizing musicians alive, and has won numerous accolades for his recordings of Russian repertoire, including two Gramophone awards. With the Oslo Philharmonic, he has recorded works by Shostakovich, Szymanowski, Strauss and Prokofiev, as well as a major cycle of orchestral works by Alexander Scriabin.

The Oslo Philharmonic was born in 1919 and over the next half-century, the orchestra’s reputation grew steadily. In 1979, it changed forever with the arrival of a young Latvian arriving in Norway, Mariss Jansons, who transformed it to rival the great Philharmonics of Vienna, Berlin and New York.
Recorded in Oslo Concert Hall, 1-8 November 2016