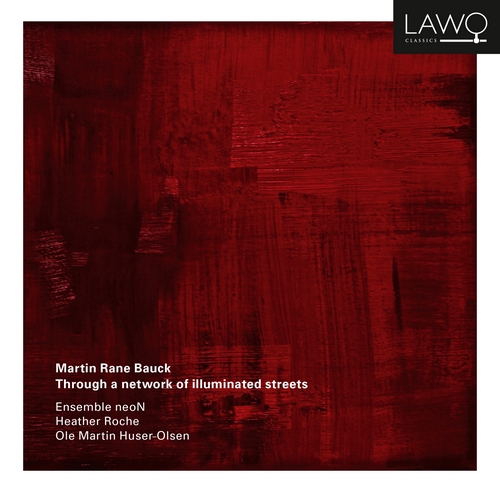 Bauck: Through a network of illuminated streets

Lawo Classics - LWC 1171
Kompozytor
Martin Rane Bauck (ur. 1988)
Wykonawcy
Ole Martin Huser-Olsen, guitar
Heather Roche, clarinet
Ensemble neoN
fretted with golden fire
sfumato
wie tau von dem frühgras
kopenhagener stille
Misantropi IV
"Through a network of illuminated streets" brings together the best chamber music from Martin Rane Bauck's classical middle period (2013–17) and points towards the 2020s. This music is characterized by drowsy states and subtle humor. It is more mumbled than articulated, and is perhaps reminiscent of staring at falling snow through a window, only to be interrupted by the occasional thud as your forehead crashes against the glass. Poetry.

Martin Rane Bauck (b.1988) is a Norwegian composer who has mainly worked with acoustic chamber music. In addition to his artistic work, he has been active in organizing the music festival Ung Nordisk Musikk and was also instrumental in starting the contemporary music ensemble Aksiom in 2010 and in 2016 the concert series Periferien in Oslo. In 2005 he was the Norwegian national champion in fraction mathematics.
Recorded in Sofienberg Church, Oslo, 8 and 10 November 2017 and in Rainbow Studio, Oslo, 9 November 2017.