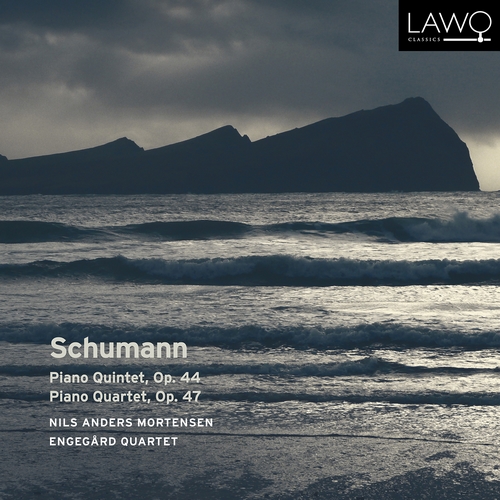 Lawo Classics - LWC 1189
Kompozytor
Robert Schumann (1810-1856)
Wykonawcy
Nils Anders Mortensen, piano
Engegard Quartet
Piano Quintet, Op. 44
Piano Quartet, Op. 47
The new release from Nils Anders Mortensen and the Engegard Quartet is devoted to Schumann’s quartet and quintet for piano and strings. Robert Schumann produced a large number of chamber music works in 1842, among them the piano quintet op. 44 and the piano quartet op. 47, both in E flat major. The works were composed at the same time, side by side, and the listener can hear definite similarities in both structure and mood, but also distinct differences.

Both works contain vigorous and expressive outer movements, in which inspiration from Mozart’s vitality and Bach’s counterpoint is combined with Schumann’s own imaginative signature in both dreamy and dramatic sections that follow each other in rapid succession. The scherzos in both works are virtuosic, with sharply contrasting middle sections. But the quintet contains a movement “in modo d’una marcia”, in march style, solemn enough to be a funeral march, and both poetic and fiery in nature. As for the quartet, it has a cantabile movement with an immortal cello melody.

The piano quartet and the piano quintet are cornerstones of the Romantic chamber music literature and contain some of Schumann’s most deeply personal musical moods.

With his critically acclaimed record releases and concerts as soloist with the principal Norwegian orchestras, Nils Anders Mortensen has distinguished himself as one of Norway’s leading pianists. He is employed as state musician in Finnmark County and is active as freelancer.

Formed under the midnight sun in Lofoten in 2006, the Engegard Quartet has rapidly become one of Norway’s most sought after ensembles, known for its bold and fresh interpretations of the classical repertoire. The quartet has attracted international acclaim and performs regularly in Norway and abroad.