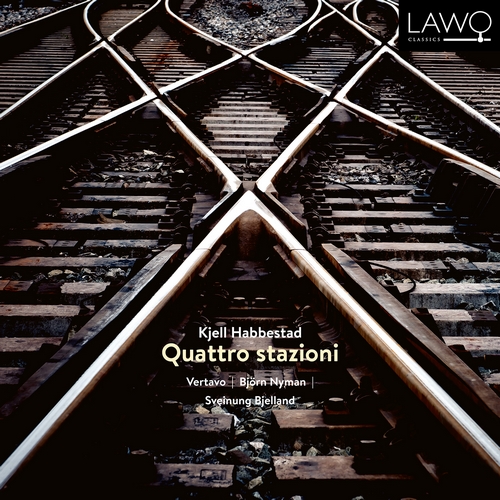 The first work, String Quartet No. 1 Quattro stazioni, takes its starting point in some specific geographical locations: Holon, Israel; Rome, Italy; Kirkwall in the Orkney Islands; and Vassenden in the Hardanger region of Norway in the form of traditional melodic material that arose in these places: a Samaritan song, a Gregorian sequence, a Medieval hymn and a Norwegian dance tune. I have used the same approach, with music built on existing (preferably very old) melodic material, in a number of compositions.

The second work, String Quartet No. 2, takes its starting point in textual rather than musical material: the poetry of several authors and with contrasting emotional content from movement to movement. There is no connection between either the poets or the poems. My intention here is not to tell a story or to convey an extra-musical message. Most vocal music begins with a text. Here the same principle is applied to instrumental music in that I have written a ‘song’. Once this has emerged as a melodic, harmonic and rhythmic totality I say “thanks for your help,” abandon the text as a carrier wave and try thereafter to not even remember what it is about while the instrumental work is further developed.

In the third work, Air d’été suédois, I take a further step in that I try to communicate a textual message through music. This is a musical narration that attempts to depict the soul’s condition and activity. To do this it is necessary that the music be supplemented with a program text, which is given below. The idea is old: it is found even in antiquity and was often used during the Romantic era by Liszt, Berlioz, Smetana, Richard Strauss and others who used such terms as «programmatic symphonies», «symphonic poems » or «songs without words».

The last work on the CD, Divertimento, is not built on either musical or textual materials drawn from other sources but is a work developed to some extent in accordance with specific classical formal principles, in this case sonata form.

These four stations have played major roles in my work as a composer; indeed, all four are important elements of the music I write today.