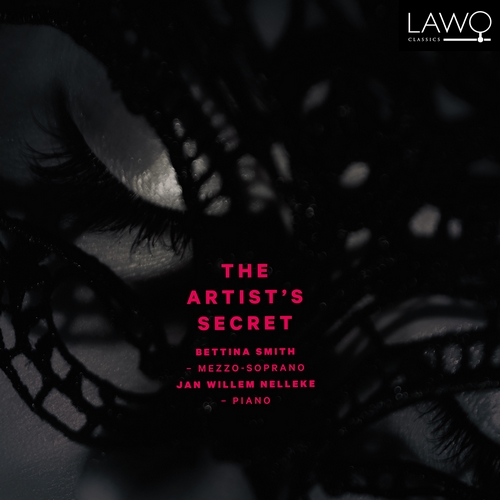 Poldowski/Regine Wieniawski:
Spleen
Sérénade
En sourdine
Sur l’herbe
Mezzo-soprano Bettina Smith and pianist Jan Willem Nelleke invite us into a somewhat forgotten and seldom performed repertoire with their CD, “The Artist's Secret.” The release contains works for voice and piano, written by female composers. The title of the disc is taken from Dutch composer Henriëtte Bosmans’ work “The Artist's Secret,” with text by Olive Schreiner (1855-1920). Here the artist's secret is that he paints his works with his own blood.

This recording is the result of the performers' intensive work throughout an entire year, mapping out the repertoire of these female composers within the art song genre, and the choice of title reflects the performers' feeling of having gained insight into these well-kept, “secret” songs.

The composers on this CD – Anna Cramer, Henriëtte Bosmans, Borghild Holmsen, Cécile Chaminade, Marguerite Canal, Poldowski, Lili Boulanger, Rebecca Clarke, and Luise Greger – were all renowned and enjoyed fame in their time, either as performers, composers, or conductors. Despite this, most have been forgotten after their deaths. There is a desire to bring these composers back into the spotlight, into the concert halls, and to make this repertoire a natural programming choice, on par with music composed by their male counterparts.

Smith and Nelleke have collaborated since 1993 and have built up a large repertoire within the art song genre. They are part of The Elly Ameling Circle.
Recorded in Sofienberg Church, Oslo, 19-21 November 2019.