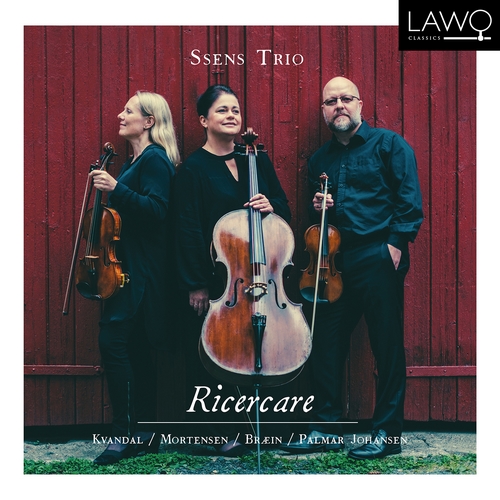 Bertil Palmar Johansen:
Ricercare for String Trio
Ssens Trio is out with its third CD release on the LAWO Classics label. While the debut album (LWC1122) featured trios of Beethoven and its successor (LWC1170) was devoted to Mozart, this release spotlights Norwegian music. With this deep dive into the Norwegian repertoire, Ssens Trio wishes to call attention to four works for string trio deserving of inclusion in the international string trio repertoire. The album is called “Ricercare”, the title of the last work on the CD, composed by Bertil Palmar Johansen, but it could have been used for the other three works as well.

“Ricercare” means to search out or explore, the very elements we find in Johan Kvandal’s String Trio, op. 12. The work stands out in Kvandal’s long list of piano pieces and songs from this period. It is his search to find his own musical expression in a new European music.

Finn Mortensen’s Trio, op. 3 was the first of his works ever performed in a public concert. The three instruments follow distinct lines in their dynamic interplay, each retaining its individual tone. We find many of the compositional means from this debut work further developed in Mortensen’s later works.

In Edvard Fliflet Brain’s “Trio”, op. 15, variations are created by twisting and turning the musical motifs and themes. The entire work is composed in one movement, with a fresh rhythmic playfulness between the instruments, and with metric shifts and changes in sound and register.

Bertil Palmar Johansen’s string trio begins with an old-fashioned “Ricercare”, set up as an expansive instrumental narrative in which the texture alternates between free and strict linearity. Inherent in the work is a search for new paths in an effort to weed out our tonal expectations.

Ssens Trio (pronounced “Essence”) was established in 2014 by three musicians with a wealth of experience in the international music scene. Members of the trio are violinist Solve Sigerland, violist Henninge Landaas and cellist Ellen Margrete Flesjo. Their previous release, “Mozart: Divertimento, Preludes and Fugues” (LWC1170) received glowing reviews and to date has been streamed over 3 million times on Spotify.
Recorded in Sofienberg Church, Oslo, 12–13 May and 11 December 2020 and 10 March 2021. Henninge Landaas plays a G.B. Guadagnini viola on loan from Dextra Musica.