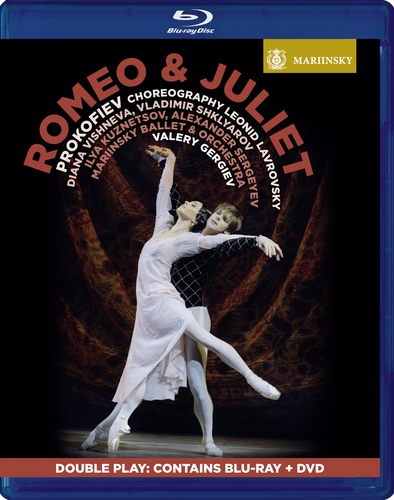 Leonid Lavrovsky’s celebrated production of Prokofiev’s Romeo and Juliet, is released for the first time in HD, and in a Double Play, blu-ray and DVD package. Filmed in the historic Mariinsky Theatre in 2013, it stars Mariinsky ballet dancers Diana Vishneva as Juliet, Vladimir Shklyarov as Romeo, Alexander Sergeyev as Mercutio, Islom Baimurado as Benvolio, Ilya Kuznetsov as Tybalt and is conducted by Valery Gergiev.

Lavrovsky’s realisation was created at the Mariinsky Theatre in January 1940, and the staging has been treasured in St. Petersburg ever since. Starring Diana Vishneva in the role of Juliet and Vladimir Shklyarov as Romeo, this production still honours that original version. Guided by the dramatic force and lyrical power of Prokofiev’s score, Lavrovsky’s choreography creates a grandly moving portrait of the star-crossed lovers and the Renaissance society which frames their tragedy.

Diana Vishneva is a prize-winner of numerous awards, including the People’s Artist of Russia (2007) title and receipient of the State Prize of Russia (2000), as well as founder of the Diana Vishneva Foundation (2010). Her title roles with the Mariinsky ballet include Giselle (Giselle), Nikia in the live cinema broadcast of La Bayadere and Aurora (The Sleeping Beauty). Multiple award winner, Vladimir Shklyarov, won 1st prize at the XI International Ballet and Choreography Competition in the “Solo” category (Moscow, 2009). His repertoire with the Mariinsky includes James (La Sylphide), Count Albrecht (Giselle) and Prince Désiré (The Sleeping Beauty). He has recently starred in La Bayadere which was screened across the globe.

TOURING Valery Gergiev and the Mariinsky Orchestra will open the season with Britten War Requiem at the Mariinsky Hall in Saint Petersburg on 29th September 2014. From 30th October to 1st November the orchestra and Valery Gergiev will perform Prokofiev repertoire, including Piano Concertos Nos 1-5 and Cinderella excerpts at the Dortmund Konzerthaus in Germany. Gergiev will also conduct Wagner’s Ring Cycle from 5th November to 9th November at the Hippodrome in Birmingham. From 10th December to 12th December Valery Gergiev and the Mariinsky Orchestra will be in Italy, performing Prokofiev Symphonies 1-7 in Santa Cecilia Hall, Rome, where they will be joined by Leonidas Kavakos for a performance of Prokofiev’s Violin Concerto No 2 on the 10th December.
Filmed at The Mariinsky Theatre, February 28 & March 1 2013 ; Leonid Lavrovsky Choreographer; Pyotr Williams Set And Costume Design; Olivier Simonnet Film/TV Director; Yuri Fateyev Ballet Master / BD50 NTSC 16:9 / DVD9 NTSC 16:9 / STEREO 2.0