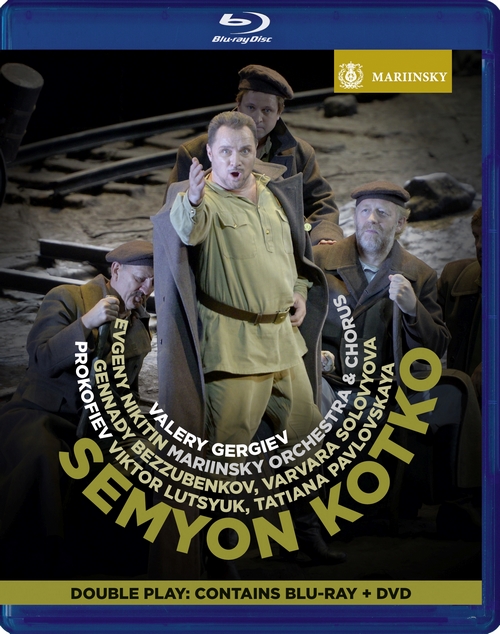 ‘Valery Gergiev is a born Prokofiev interpreter’ The Guardian 2016 marks the 125th anniversary of Sergei Prokofiev’s birth and Valery Gergiev is widely regarded as one of the composer’s greatest interpreters. Joined by a fine cast of soloists, Gergiev and the Mariinsky celebrate the great Russian’s genius with a world-first DVD & Blu-ray release of his ‘raw, thrilling and utterly engrossing’ opera, Semyon Kotko. Based on the novel I, Son of Working People by Valentin Katayev, who also wrote the libretto with Prokofiev, the perceived propagandist nature of the story meant its inherent musical quality was initially overlooked. Though not by all, as celebrated pianist Sviatoslav Richter remarked: ‘The premiere of the opera was a momentous event in my life [...] That evening, when I first heard Semyon Kotko, I understood that Prokofiev was a great composer.’ Directed by award-winnning stage director Yuri Alexandrov, and filmed by celebrated Mariinksy director Anna Matison - whose work includes operas by Rimsky Korsakov, Shchedrin and Berlioz - this staging of Semyon Kotko originated in 1999 and has been awarded two key Russian prizes, both the Casta Diva and the Golden Mask awards. Ukrainian tenor Viktor Lutsyuk received praise for his performance in the lead role of Semyon:

‘Viktor Lutsyuk sang with bright-eyed enthusiasm as the model hero Semyon, and Tatiana Pavlovskaya was in captivating form as Sofia. Tkachenko’s rancour and his humour were splendidly captured by Gennadi Bezzubenkov.’ The New York Times

‘Raw, thrilling and utterly engrossing, with strong performances. Viktor Lutsyuk has everything required for the part - the right voice, plenty of panache and lots of presence.’ The Moscow Times

Semyon Kotko is now a key work performed regularly in Russia, as well as internationally, and is presented here as a stunning DVD & Blu-ray package, featuring HD audio (inc. surround sound) and with a wide range of subtitles including English, French, German, Spanish, Japanese and the original Russian.