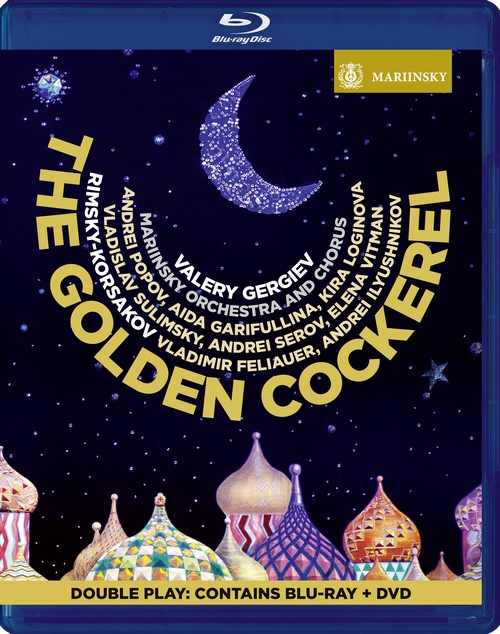 Golden Cockerel
Opera in three acts
Following celebrated productions of Prokofiev Semyon Kotko and Shchedrin The Left-Hander, Valery Gergiev continues his survey of uniquely Russian works with The Golden Cockerel, Rimsky-Korsakov’s final and, arguably, most mysterious opera. This vibrant new production mixes live action with CGI, and is the vision of Anna Matison, an acclaimed playwright, script-writer, film director and producer. The Golden Cockerel was Matison’s directorial debut with the Mariinsky, and saw her also take on the roles of production and costume designer. “In selecting the genre of the fairy-tale,” the stage director says, “I do not intend to experiment with it as a genre. It is a family story: for children it is a merry and vivid tale; for parents it is a wise parable.” The melodious nature, beauty and leitmotifs of the plot are underscored by the production designs; the opera uses pantomime and masquerades, while the sets utilised 3D video projections. For much of the twentieth century, Rimsky-Korsakov’s operatic work was largely ignored in the west, and he was better-known for his editing of major works by Mussorgsky. A thoroughly Russian composer, his music derived much from his country’s rich legacy of folk tales, and his lush, exotic orchestration was a strong influence on his student Stravinsky. Completed in 1907, just after the Russo-Japanese war, the opera’s depiction of a witless Tsar meant it was initially banned and Rimsky-Korsakov never saw it performed. Finally staged in 1909, it received its first performance at the Mariinsky in 1919. Based on text by Alexander Pushkin, with libretto by Vladimir Belsky, the opera begins with The Astrologer (Andrei Popov), who introduces himself as the director of the story, a moral tale, through a fantastical kingdom. King Dodon (Vladimir Feliauer), once a great warrior, is now old and tired. However, his sons (Andrei Ilyushinkov & Vladimir Sulimsky) have not inherited his talent for warfare and his kingdom is now under threat. To aid the King, the Astrologer brings a cockerel, whose cries, he says, will warn of any attack. In gratitude, Dodon offers him one wish, which he decides to hold on to until later. Soon after the cockerel crows, and Dodon sends his sons to battle. Following on behind them, he finds them slain and his army defeated. Dawn breaks and a despairing Dodon is greeted by a mysterious figure, the beautiful Queen of Shemakha (Aida Garifullina). She seduces Dodon and they return to his kingdom, with her as his consort. Seizing this moment, the Astrologer decides to now is the time to use his wish, demanding Dodon hand over the Queen for himself. Furious, the Kings slays the Astrologer, but is then pecked to death by the Cockerel. Finally, the Queen and Cockerel both disappear, leaving behind chaos. Returning in an epilogue, the Astrologer finally explains that all the characters were imaginary, save for himself and the Queen.
RECORDED: MARIINSKY THEATRE, ST PETERSBURG, DECEMBER 2014