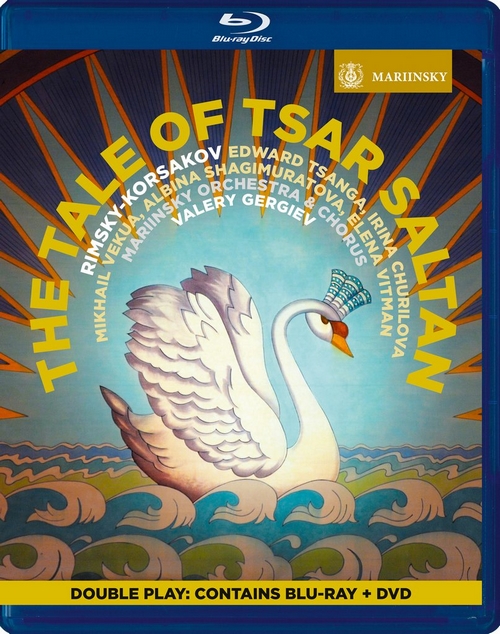 Rimsky-Korsakov: The Tale of Tsar Saltan

The Tale of Tsar Saltan
Sung in Russian
Subtitles in English, French, German, Spanish, Russian and Japanese
As a companion to 'The Golden Cockerel', Valery Gergiev presents a second Rimsky-Korsakov opera on the Mariinsky Label, 'The Tale of Tsar Saltan'. Rarely staged and the only complete performance available on Blu-ray or DVD, this release is part of Valery Gergiev’s mission to showcase the breadth and depth that Russian music has to offer, capturing Rimsky-Korsakov’s adventurous and magical work for posterity. This production features a cast of the Mariinsky’s finest singers, including sopranos Irina Churilova, as Tsaritsa Militrisa, and Albina Shagimuratova as The Swan-Princess; and bass-baritone Edward Tsanga, who died suddenly in early 2017, in the lead role.

Originally composed to celebrate Pushkin’s centenary, the full title of the work - 'The Tale of Tsar Saltan, of His Son the Renowned and Mighty Bogatyr Prince Gvidon Saltanovich, and of the Beautiful Princess-Swan' - is indicative of the fantastical content of the opera. It is an old-fashioned Russian treat for the eyes and the ears from the country’s most long-standing musical institution. Filled with colourful music, typical of Rimsky-Korsakov’s style, it is also the source of the instantly-recognisable 'Flight of the Bumblebee', which arrives when the magic Swan-Princess changes Prince Gvidon Saltanovich into an insect.
Filmed at the Mariinsky Theatre, St Petersburg, July 2015