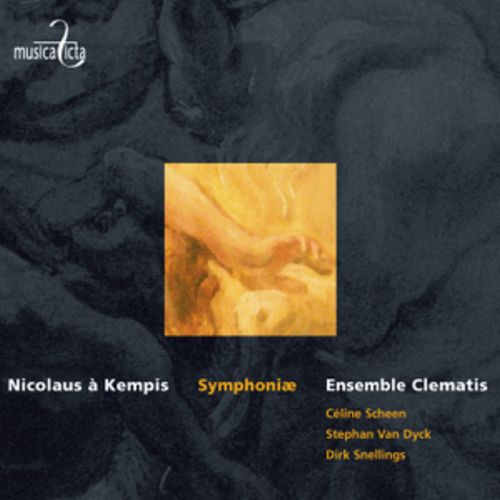 Musica Ficta - MF 8001
Kompozytor
Kempis Nicolaus (1626-1670)
Wykonawcy
Celine Scheen, sopran
Stephen Van Dyck, tenor
Dirk Snellings, Bass
Clematis Ensemble / Stephanie de Failly
Symphoniae
Nicolaus a Kempis was a composer active in Brussels in the middle of the 17th century. Not much is known about this oddly-named man. He was born around 1600, but it is unknown where. Some musicologists think that he came from northern Italy, perhaps from Florence. He died in 1676.

The earliest extant piece of biographical information about him is his nomination as organist of the cathedral of Saints Michael and Gudule in Brussels around 1626. His son, Joannes Florentius, succeeded him there in 1670. Between 1644 and 1649, he published in Antwerp several volumes of Symphoniae amounting to 98 short instrumental pieces and eight motets. He wrote sonatas ranging from pieces for solo instrument and continuo to pieces in six parts. Nicolaus a Kempis was the first musician to import the Italian viol style and techniques of Girolamo Frescobaldi, Marco Uccellini, Giovanni Battista Fontana and Dario Castello in the southern Low Countries.