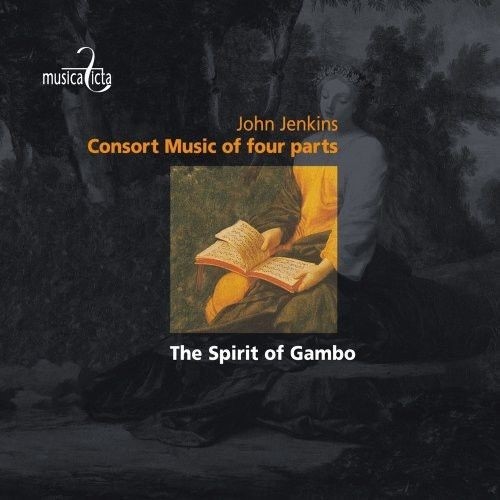 Fantasy VII
Fantasy VI
Fantasy III
Fantasy XII
Fantasy IX
Fantasy XIV
Pavan
Fantasy XIII
Fantasy XI
Fantasy V
Fantasy VIII
Fantasy XV
Fantasy II
Fantasy XVI
John Jenkins’ life encompassed the golden age of English instrumental music, from Byrd to Purcell. Throughout this period, he scrupulously followed the fashions of English chamber music as it evolved in stages from the typical English fantasia towards the trio sonata of more Italianate inspiration. With considerable skill and a strong sense of lyricism he brought the fantasia for viol consort to its zenith. John Jenkins and his much esteemed friend William Lawes can be regarded as the two most important composers in England during the reign of Charles I.

The ensemble The Spirit of Gambo focuses on consort music, a genre mainly intended for performance among family or friends, and usually played on between four and six viols. The tradition reached its peak around 1600. Thanks to both its abundance and its quality, this repertoire offers The Spirit of Gambo an inexhaustible supply of riches. The group is appearing increasingly often at large festivals, where its concerts are particularly welcomed. The Spirit of Gambo has already recorded several CDs, all of which have been enthusiastically received. Over time, the group has built up a unique collection of instruments in order to convey the full richness of the consort repertoire. Its concerts represent a fascinating quest in the world of lost sonorities and forgotten atmospheres.