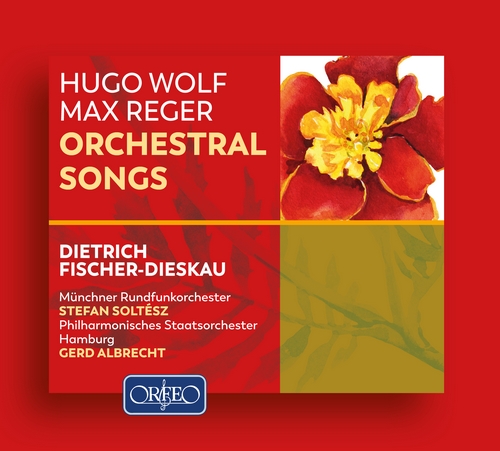 CD 2:
Max Reger:
Der Einsiedler, Op. 144a
Hymnus der Lieber, Op. 136
An die Hoffnung, Op. 124
Requiem, Op. 144b
Hardly any other singer was more associated with and devoted to the nigh 300 songs by the Austrian composer Hugo Wolf than Dietrich Fischer-Dieskau. Utterly convinced by the richness of Wolf’s oeuvre, Fischer-Dieskau took Wolf’s previously hardly heeded songs to many stages throughout the world. Reger was frowned upon as an ‘awkward traditionalist’ and ‘piece worker’, but Reger’s songs show a completely different, moving and profound side of the composer, who takes a significant position in the song composition of the turn of the century. Even Fischer-Dieskau did not devote himself to Reger exactly frequently, unlike his downright encyclopaedic approach in other fields. In his recording of a number of particularly fine gems among Reger’s orchestral songs, he was supported by Gerd Albrecht. The outcome is an artistic symbiosis of the highest quality, testifying to a passion and ardency that can be found seldom: a veritable sound document!
Recording: Bayerischer Rundfunk, Studio 1, 26-28.03, 08.06.1990 (CD 1); Norddeutscher Rundfunk, Studio 10, 10-14.07.1989 (CD 2)