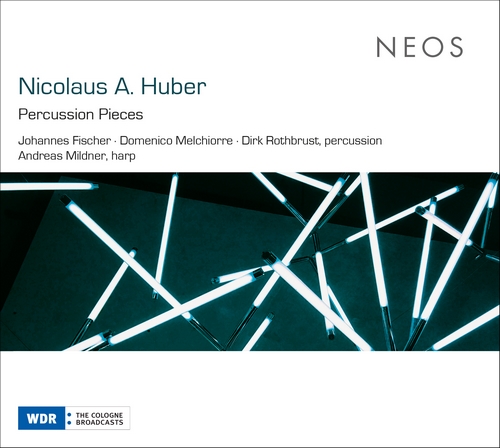 Barong des Méduses
Fingercapriccio
Póthos
Hímeros
Erosfragmente
Since Edgard Varese’s Ionisation for thirteen percussionists (1929–1931) first opened the exotic regions beyond traditional borders of fertile musical soil, the use of percussion instruments in contemporary music has been deeply explored and cultivated. Composers who have followed Varese, Cage, Stockhausen, Xenakis, Nono, Kagel, Riedl, Berio and many others face a collection of instruments that is as gigantic as it is global. In his article for the German compendium on percussion playing techniques entitled Die Spieltechnik des Schlagzeugs: Schlägel, Anreger und Anwendungen (Kassel 2018, p. 20), Nicolaus A. Huber speaks of the “luxurious world of percussion”. Instead of drawing on these resources lavishly, he makes a sparing selection for each piece, which in turn has important consequences for the work’s sound, character, morphology and form. With a reduced instrumentation, for instance a pair of cymbals in Clash Music (1988), Huber aims for maximum differentiation of sounds, rhythms and performance techniques. With the programmatic title dasselbe ist nicht dasselbe [the same is not the same] for snare drum (1978), he emphasizes the non-identity of ostensibly identical events, which in reality are marked by minute discrepancies. Precision and diversity are also hallmarks of his newest percussion works. Huber has tested all of the instruments used in these works himself, investigating their sonic possibilities and playing techniques, even going so far as to indicate certain manufacturers, retailers and product numbers in the score. His notation meticulously stipulates playing techniques with various beaters, left or right hand, fingertip, fingernail, snapping fingers, changing points of contact and – with the aid of small graphics – specific directions of motion and rubbing or scratching gestures.