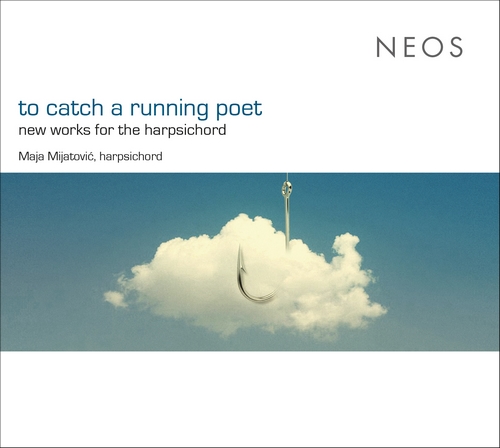 to catch a running poet - new works for the harpsichord

Tamara Friebel:
Dance Me To My Rebirth

Hannes Dufek:
arresting images
Often one begins something without knowing where the journey will end up – whether an idea seen darkly is fertile or able to survive, whether one is in the right place to execute the idea properly, and what one might encounter on this path into the unknown. It is not uncommon for precisely such audacious, risky endeavors – steps in a previously unknown direction – to yield the most beautiful fruit. You are holding one of these beautiful fruits in your hands: the portrait album of Maja Mijatović, “to catch a running poet”, is the result of collaborations the harpsichordist began long ago with various living composers and marks the end point of just the sort of apprehensive undertaking described above, one that feels more like sleepwalking at the start. Back then it was not at all clear that an album would be made. Maja Mijatović’s chief concern was simply to engage with as many facets of contemporary music as possible. Her instrument, the harpsichord, does not lend itself especially well to this task, being principally associated with historical performance practice, figured bass and continuo playing in Baroque music. As a person of our time – a person with many interests, including an intense awareness of our present moment and its cultural manifestations – it is, so it seems, neither possible nor desirable for Maja Mijatović to limit herself to performing works written centuries ago. Thus it was from inner necessity – from sheer hunger to encounter the unknown – that Maja came to ask living composers for new works. What is different are the relationships between the interpreter and “her” composers. Some are longtime friends and acquaintances. Others came onboard later and, once the idea of an album had crystallized, sort of composed “for” the CD. What is also different are, of course, the works themselves. Eight compositions, nine pieces (Christian Diendorfer’s work is conceived as two pieces) – and nine completely different approaches to the proposed task of writing a new work for solo harpsichord. One must not neglect to mention the demands that this diversity places upon the interpreter: Not only does New Music’s fundamentally other approach to music – with its paradigm shift in relation to form, material and structure – demand the performer jump out of themself into what is often quite brisk morning air, but there is also the issue of playing technique. When learning new works of New Music, the two-pronged question of the purely technical solution of playing and, its inverse, of the playful solution of technical demands often requires considerable effort. To produce “to catch a running poet”, Maja Mijatović had to wrestle with this task a full nine times (the composers did not disappoint, with each one posing their own unique set of challenges).