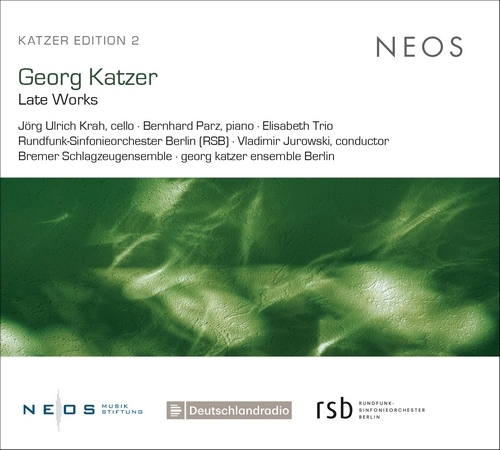 Neos - NEOS 12004
Kompozytor
Georg Katzer (1935-2019)
Wykonawcy
Jörg Ulrich Krah, cello
Bernhard Parz, piano
Elisabeth Trio
Bremer Schlagzeugensemble
georg katzer ensemble Berlin
Rundfunk-Sinfonieorchester Berlin / Vladimir Jurowski
postscriptum zu B.
…blüht nur im Gesang
discorso
percussum
La scuola dell’ascolto 5
Georg Katzer, one of the genuinely great composers of the former GDR, the true cosmopolitan and world-wanderer among them, influenced the discourse more than almost any other on a variety of levels. He always appreciated the world’s manifold cultures, entered into musical dialogues with their purveyors and avoided colonizing or adapting them. This enabled him to pursue a universal aesthetic, philosophical and literary education. With increasing age, he was disturbed ever more by the globalised world after German reunification, with its incapacity for societal discourse, and his emphatic demand for emotional and intellectual heterogeneity was articulated musically in increasingly dense, pressing ways. This led to a late output that was anything but detached and showed a certain kinship with Walter Benjamin’s Arcades Project, most urgently expressed in the late orchestral work discorso, which we will discuss first.

The present CD shows with kaleidoscopic singularity how emphatically, and with what inner necessity, Katzer focused once more on the great diversity of approaches in his wide compositional palette during the last two years of his life, condensing them into an impressive summation of his compositional identity.