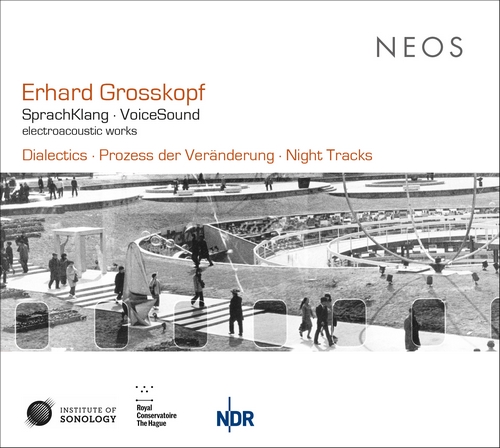 After the first wave of studios for electroacoustic music were founded worldwide, the Instituut voor Sonologie of the Rijksuniversiteit Utrecht, founded in the 1960s, quickly became one of the most renowned studios worldwide under the long-term direction of composer Gottfried Michael Koenig, using control voltage studio technology at an advanced level. In 1969, 35-year-old Erhard Grosskopf was one of six German composers commissioned to compose for the Osaka Pavilion at EXPO’70, for which he absolutely wanted to use the Utrecht Studio to realize his electronics for Dialectics. Happily, the Studio was made available to him. Subsequently, in 1971 and 1972, Grosskopf was an academic research assistant in Utrecht at Koenig’s invitation, where he also worked on his compositions Prozess der Veränderung and Night Tracks. In 2020, the analogue tapes from Grosskopf’s time in Utrecht were digitized by Kees Tazelaar, the director of the Institute of Sonology in The Hague, which is the present location of the former Utrecht Studio.