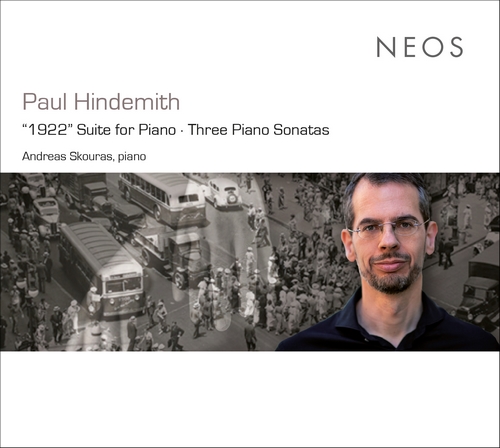 Neos - NEOS 12021
Kompozytor
Paul Hindemith (1895-1963)
Wykonawcy
Andreas Skouras, piano
“1922” Suite für Klavier, Op. 26
Sonate I in A
Sonate II in G
Sonate III in B
“Could you also use foxtrots, Bostons, rags and other kitsch? When I can’t think of any decent music, I always write such things. I’m quite good at it and I think you could do more business with such a piece than with even my best chamber music. (Good kitsch is also terribly rare)”. This was the question a quite confident Paul Hindemith posed in 1920 to Schott Music of Mainz (Germany), to which the publisher replied in the affirmative. An example of “such things” is the Piano Suite “1922”, Op. 26, which bears within its name the year it was written. With the exception of the serious Nachtstück (“Night Piece”) in the middle, the suite consists of stylised dances and is understood to be a parody of the Baroque suite. The final Ragtime was preceded by Hindemith’s cheeky “Direction for Use”. The suite was premiered by Carl Friedberg in Berlin in October of 1922.

The short first movement of the First Piano Sonata, in which two themes are briefly illustrated and then concluded with a coda, serves less as a representative beginning of the work than as a prelude to the weighty second movement, a funeral march with the genre-typical dotted rhythm over slow, striding quarter notes. In the third movement, the pent-up energy explodes. The fourth movement, a reordered recapitulation of the motifs of the first movement, serves the same function, as an introduction to the complexly-structured finale.

The Second Piano Sonata, because of its smaller scope, easier-to-grasp themes and reduced pianistic requirements, is also accessible to amateur performers. In fact, this relationship is also observable from a musical-thematic perspective: the beginning of the first movement is derived from the theme of the opening choir of Hindemith’s lay cantata Frau Musica, Op. 45, No. 1 (1928). The dance-like second movement was conceived as a scherzo with a syncopated trio in the middle section. A cheerful rondo follows, opening with a slow introduction together with a coda, and ending thoughtfully with the final repetition of this coda.

The Third Piano Sonata begins with a lyrical Siciliano, which takes on more dramatic features through its middle section. A swinging, pulsing theme frames the scherzo-like second movement; urgent eighth notes determine the middle part. A funeral march, a fugato and an arioso are the starkly-contrasting elements of the third movement. In the large-scale and progressively-thickening double fugue of the final movement, the fugato theme from the third movement is taken up again and skilfully integrated.