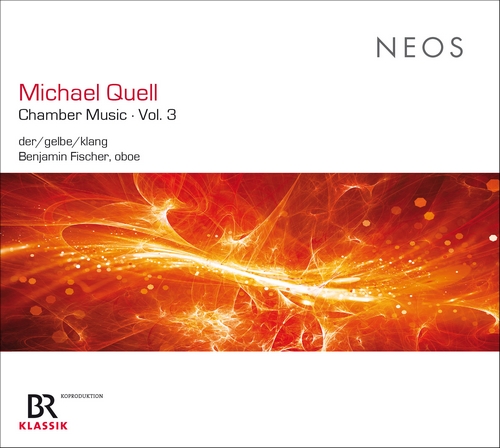 Neos - NEOS 12103
Kompozytor
Michael Quell (ur. 1960)
Wykonawcy
Benjamin Fischer, oboe
der Gelbe Klang
Energeia aphanés III – physis
Energeia aphanés II
Interdependenzen
String I
Energeia aphanés I
String III – Branes
The world, seen as a kind of great puzzle into which man strives to penetrate ever deeper with the instruments of science and in which, behind every single insight, a whole compendium of new captivating questions and puzzles immediately opens up afresh – this approximates how Michael Quell’s world view can be described. This view immediately becomes the driving force behind his artistic work, which is strongly characterized by the search for the existential. For the composer, scientific thinking, in particular the specific world view of physics, plays a crucial role. For Quell, the visionary, utopian moment that drives his thinking and work lies in the urge to “go beyond what is as yet conceivable and tangible”. He is constantly searching for the instruments with which he can penetrate and enhance these new worlds, meticulously, even obsessed with detail.

Whoever listens to Quell’s music allows themselves to be carried away into such unknown worlds; to have entirely new spaces open up: spaces of perception, sound spaces, structural spaces, hyperspaces, world spaces. The composer creates fascinating sound worlds with complex interacting work structures, in which the structure-giving principles are deliberately kept hidden, but whose results are clearly recognizable on the surface. In so doing, the “world of appearance of things” is developed in a concrete and differentiated way. Each work takes its own unexpected turns and penetrates previously unconjectured spaces. In retrospect, the parts of the work which have been heard come together to form a coherent whole that reveals itself as a multiple cosmos.

In Interdependenzen (1998), these moments are created in philosophical-aesthetic respect and also come to bear in the musical design – particularly in the juxtaposition of novel and tonally extremely diverse sections. Quell quotes the physicist and philosopher Peter Eisenhardt: “Reality is interaction, it is, at all, only insofar as it exerts an effect on an observer and suffers an effect from this observer.” Worlds collide in the work’s instrumentation: guitar and percussion each have their own, significantly different, historically determined aura. At the beginning of the work, the instruments seem to want to free themselves from connotations and historical ballast. Large passages of the guitar part are purely percussive. The guitar is played with a bottleneck, to create microtonal sound structures in a narrow tonal space. As a result, its sound approximates the percussion, which, in addition to instruments made of fur, metal and wood, also employs a cardboard tube and generates friction sounds with sandpaper. Familiar instrumental sounds flicker repeatedly between microtonal sections and veritable orgies of percussion. The end belongs solely to the guitar, stroking its highest and lowest strings with a violin bow, thus letting the music gradually ebb away.

Dark Matter (2011) is the first of Quell’s works to take its point of origin from astrophysics: it refers to the cosmological hypothesis of dark matter, which is not detectable nor even observable, but is indispensable in explaining the rotation speed of galaxies. (A recording of Dark Matter, as well as of String II – Graviton, can be found on the CD “Michael Quell – Chamber Music Vol. 2” [NEOS 11904]). The composer subsequently initiated two groups of works: String and energeia aphanés. The individual compositions belonging to one of the two larger cycles of works are, however, independent works in their own right. In their conception, they are comparable, in their respective expression they are highly individual.

“energeia aphanés” means “dark energy”. It is hypothetical, its assumption is an attempt (and currently the only one) to explain that the universe is expanding at an increasing speed – an observation that contradicts the gravitation of matter in the universe. As an allegory for composing, the idea of principles that operate in the background and are imperceptible in the foreground holds downright “adventurous aesthetic potential” (Quell).

energeia aphanés I (2013) is characterized by the idea of deliquescent time. An impulse at the beginning of the work triggers resonances, which in turn function as impulse generators and for their part form resonance surfaces. Multiphonic and fluctuating sound fields in different regions and diverse instrumentations alternate irregularly. In the middle of the piece, the increasing densification rips off, triggering the movement of three of the four performers in the room, where they work with glasses and create high, shimmering microtonal soundscapes. Indeterminate and seemingly distant planes of noise originate by rubbing on frame drums. In the end, the high register is revisited and the music fades away, vibrating. Having traversed the expanse of space, time seems (also on a formal level) to dissolve with it.

energeia aphanés II (2018) primarily juxtaposes noise and sound: beginning with a contrabass clarinet and accordion, the movement is extremely dense, but situated on the threshold of perceptibility. Pitches are only hinted at late in the movement and then assert themselves more and more strongly in multi-layered unfolding processes. The following vortex-like densification suddenly breaks off, allows the finest instrumental sound mixtures to be heard in an extremely high register and releases new evolutions. Polyphonically fluctuating surfaces are absorbed in the low register by the accordion, comparable to a process of thinning-out matter in the universe. A renewed process of reconstruction is followed by the deconstruction of sound, which literally dissolves into thin air.

energeia aphanés III – physis (2019) strives outward more strongly than the other two compositions in the group of works, aiming at the external-physical, even into that which lies beyond the music. Potentially, dance is foreseen in performances. The expressive density of the beginning lies shadowed around the note b. It strives towards an explosion that leaves behind flat fragments, microtonally screwed together. These accumulate in a juxtaposition and superimposition of instrumentally different blocks. Carrying a few small musical building blocks with them, the performers then move to different positions at the perimeter of the room. Emanating from extremely high accordion notes, a tremblingly vibrating, brightly iridescent sound world emerges, which is increasingly characterized by repetitions. Outright serrations in the movement lead to its dénouement into recumbent individual events.

The title of the workgroup String refers to the string theory of quantum physics. As with the assumption of dark energy, it is hypothetical, but it is the only theory to date that unites all four elementary forces and in which all elementary particles are ultimately traced back to different patterns of a kind of primordial vibration, comparable to a tiny (one-dimensional) vibrating string. The group of works is based on four individual pieces, each of which is inspired by different aspects of string theory: String I for oboe (2013) refers to the elementary, fundamental peculiarities of the theory and the one-dimensional, oscillating threads; the other works are dedicated to specific features of string theory: String II – Graviton for nonet instrumentation bears the name of a particle of matter in the title that imparts gravitation; the title of the trio for violin, accordion and piano, String III – Branes, names the two-dimensional objects of investigation, which are comparable to vibrating planes but can also have significantly more dimensions (string theory calculates in or with a space of 11 dimensions); the composition String IV – M, still to come, alludes to M-theory, which extends and generalizes string theory(s): according to the physicist Edward Witten, the letter M itself is enigmatic and stands for membrane or matrix, magical or mysterious.

Even compared to Berio’s Sequenza VII and similar solo compositions for oboe, the technical and physical challenges of String I are downright adventuresome. This is due to the dimensions of the work and not least to the texture being characterized by the dense interlocking of moving multiphonics with other highly demanding playing techniques. The “Fadenmusik” [string music] is initiated by the note Bb5, which at first fluctuates imperceptibly in colour until its inner movement pushes outwards to capture new tonal spaces. Various paths are explored in the composition: they are based on micro-variations, lead to the multifariously figurative, to polyphony, periodic movements as well as inner oscillations and use multiphonic tremoli, double trills and trill glissandi. The ending takes up the initial idea so that the oboe music can fade out, oscillating on the note Ab6.

String III – Branes (2019) is chamber music in extremely dense interaction. By no means shying away from extremes, the fascinating diversity of the ensemble sound is further due to the use of assistive devices: in addition to bell-like harmonics, plectrums, hardcovers from books, shot glasses, felt-covered wood, nylon cords and E-bows are used in the piano part to produce muffled or hard, buzzing and static as well as spherical-symphonic sounds. The first part is set in complex motion with five rhythmic measures, upon which the sound mass is unceasingly condensed until the structure breaks, and, for a while, only the note D1 remains. Materials accumulate around it and it becomes entwined in undulations. A symphonic middle section is followed by the final passage, reminiscent of an expanse of debris, in which fragmented elements enter into new constellations. With the reduction of the multifarious and the over-stretching of time, an extremely broad horizon opens up at the end.

In these five later works, the sound worlds are further differentiated, structural and tonal edges further explored. The background relationship density is high: micro-and macro-levels are uniformly conceived, so that coherence is maintained despite all the diversity of forms. Processes of temporal and spatial compression or thinning-out shape the sonic image. With this, the dissolution of the linear flow of time, the overcoming of time and space is an ideal that contains the potential for transcendence. Inspired by astrophysics, the composer creates something that points beyond what is otherwise perceived (three-dimensionally) and takes us listeners into unforeseen spaces.