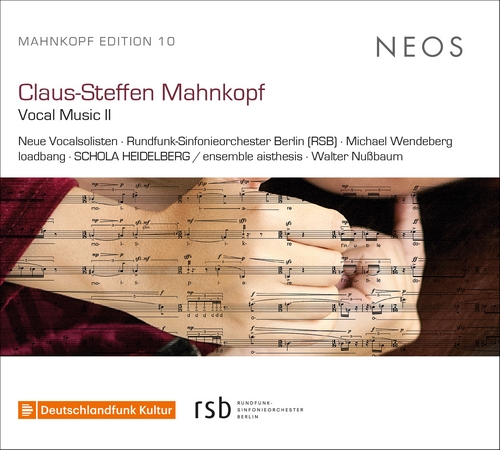 Neos - NEOS 12110
Kompozytor
Claus-Steffen Mahnkopf (ur. 1962)
Wykonawcy
Neue Vocalsolisten
loadbang
SCHOLA HEIDELBERG
ensemble aisthesis / Walter Nußbaum
Rundfunk-Sinfonieorchester Berlin (RSB) / Michael Wendeberg;
Dov’e?
432 Park Avenue. Hommage a NYC
Astronomica
When my wife, the Jewish philosopher of religion Francesca Yardenit Albertini, died in March 2011, I felt compelled to keep her memory alive in two ways: firstly, by writing a book about her (Deutschland oder Jerusalem. Das kurze Leben der Francesca Albertini, 2013), and secondly, by deciding to compose a commemorative work – but a portrait, not a requiem. Francesca began writing at an early age, and was even invited to appear on Italian television. This was a brief phase, but I found numerous poems among her possessions that she had written between the age of 17 and 20; I chose ten of these. They deal with the subjects of truth, death, pain, being forgotten, Michelangelo, dawn, uprooting, letters, thinking, torment and shadows. They are sung in five large verses with orchestral accompaniment. At the same time, almost every instrument is given a solo whose tempo is independent from the rest of the orchestra. I also inserted a number of interludes that combine to form a narrative following our path together over 13 years.