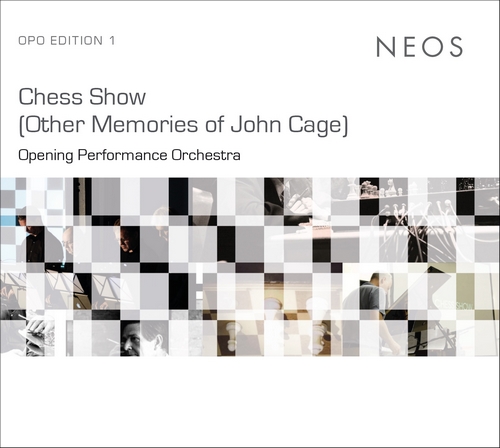 CD 2:
Chess Show [4’34” version]
"The sound is transformed and restored, but in an unrecognizable manner! It is reborn. It is perpetual rebirth or reincarnation. It is life. And that goes on and on.” This quotation from John Cage’s book For the Birds resonates in individual versions of Chess Show, a composition created by Prague-based Opening Performance Orchestra.

The idea of Chess Show originated in the mid-1990s when it was played non-publicly under the title Cagemix. In 1962, John Cage used for his composition Atlas Eclipticalis maps of the stars made by Czechoslovak astronomer Antonín Bečvář. Our aim was to link up to this method of work, while using a real game of chess. Later on, Chess Show was performed live five times, twice in a shortened version. The first Chess Show performance took place in Telč in 2007. To commemorate the centenary of John Cage’s birth in 2012, Chess Show was played at the Membra Disjecta for John Cage exhibition at the DOX gallery in Prague and at the Gallery of Fine Arts in Ostrava in an electronic version for four laptops and a video. The most recent live performance of Chess Show was in 2017 at the Ostrava Days contemporary music festival, with Reinhold Friedl as a soloist. The other version of Chess Show was created in the studio Chess Show [4’34” version], in cooperation with Miroslav Beinhauer, a Czech piano virtuoso, as a guest.