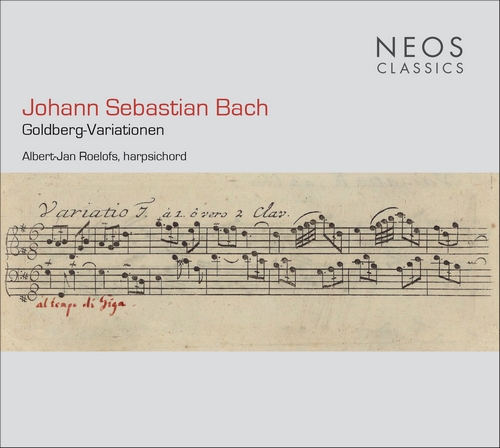 Neos - NEOS 32101
Kompozytor
Johann Sebastian Bach (1685-1750)
Wykonawcy
Albert-Jan Roelofs, harpsichord
Aria
Variatio 1-30
Aria da Capo e Fine
Whether it was ever the intention to perform the Goldberg Variations in their entirety will always remain an open question. Contemporary reports from the circle of Johann Sebastian Bach, who composed this work around 1740, point in a different direction. Around 1800, based on information from Bach’s sons, Johann Nicolaus Forkel tells of the sleepless nights of Count Hermann Carl von Keyserlingk, at that time (1733–1745) Russian envoy in Dresden. Keyserlingk requested that his friend Bach make this persistent insomnia more bearable with music from his own hand. Bach hoped that a work with variations on a bass line would best satisfy this desire. Keyserlingk then asked his house harpsichordist, Johann Gottlieb Goldberg (after whose name this work became known), occasionally to play one or more of ‘his’ variations. However, it is the whole and integral performance of this set of variations that has acquired a permanent place in the repertoire of many a harpsichordist and pianist. By opting for an integral performance, the interpreter is expected to determine his thoughts in relation to the question of how the various variations relate to each other.

If it was not the intention to play the whole series over and over again (although we do not know how serious Keyserlingk’s insomnia was), neither would it have been the intention to deprive the Count of his sleep by means of virtuosity and permanently changing tempi, an option most interpreters choose.

It is completely unclear where the idea of playing variations in different tempi comes from. The original score from 1741 gives only one tempo indication (at variation 15 andante), although two other indications (at variation 16 and variation 22) imply a specific tempo. Editions with tempo indications for each individual variation cannot be found until the middle of the nineteenth century, which reveals the need for clear tempo differentiations, obviously an expression of a Romantic spirit. This attitude, however, contradicts the Baroque aesthetic of regularity and symmetry.

Nevertheless, the laws of tradition persist to this day, even after a copy of the first edition of this work, with notes by Bach himself, including two new tempo indications, was found in the 1970s.

However, on closer inspection of this copy, now known as Bach’s Handexemplar, it is precisely the tempo indications that do not seem to be of essential importance with regard to the interpretation of the variations concerned. They even give the impression of being superfluous. The annotations to variation 7: al tempo di Giga, and that pertaining to variation 25: adagio, actually confirm what is made clear by the score itself. From the addition of a tempo marking it can be assumed that Bach’s score did not convey his intention to his contemporaries clearly enough. Apparently, variation 7 was NOT played al tempo di Giga and variation 25 NOT adagio.

The inclusion of a tempo marking therefore indicates a deviation in tempo. We can conclude from Bach’s addition of two tempo markings in his Handexemplar that he emphasises the importance of special, deviating tempi. This leads to the conclusion that the Goldberg Variations, with the exception of the variations whose tempi had been specified (in the revised version the variations 7, 15, 16, 22 and 25) should all be played in a single standard or uniform tempo!

Bach wrote the variations in different time signatures. Against this background, the question arises as to how this standard or uniform tempo is to be maintained. The answer can be found in the last bar of variation 26, where the notation of the rests deviates from the usual in a 18/16 time signature. The subdivision of the rhythmic accents thus shifts from 2 x 3 to 3 x 2 semiquavers. This last subdivision corresponds to the rhythmic accents in a 6/8 bar, the time signature of variation 27. Since, according to sources from Bach’s circle (including Kirnberger), the 8-denominator metres are to be understood fundamentally as triplet subdivisions of the 4-denominators, it quickly becomes clear that a uniform pulse is recognisable in the various variations and time signatures, which is based on the quarter-note of the Aria and can thus be regarded as the starting point for the choice of tempo. The present recording draws precisely on this idea; a uniform pulse creates a great unity in the work and lets the bass line work as a kind of ‘mantra’ which, despite the fact that this is anything but soporific music, allows the listener to experience a ‘swaying’ cadence.