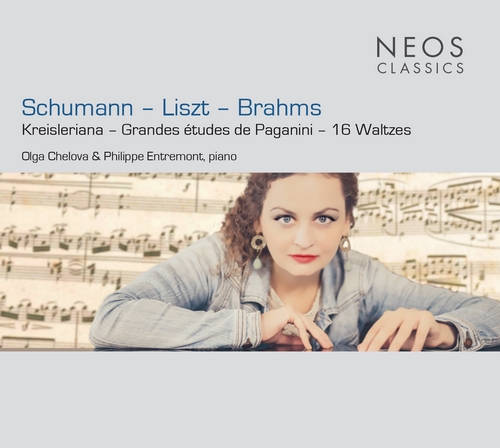 In an apparent creative frenzy lasting only four days, Schumann’s half-hour cycle of “Fantasy pieces for the pianoforte” was composed in April 1838 and extended by an eighth piece in May. The title is identical with a collection of seemingly unrelated sketches, Kreisleriana – plural of Kreislerianum – from the estate of the fictional “Kapellmeister” Johannes Kreisler, which E. T. A. Hoffmann had printed in 1814 as part of the Fantasiestücke in Callot’s Manier. Schumann was also able to identify with this character, in much a sense the poet’s alter ego. It fits all too well into his own artificial figures “Eusebius” and “Florestan”, who represent the – at least – two souls in his breast. Kreisler would be predestined for membership of the equally imaginary “Davidsbündler”, who fight against the real philistinism, and are specifically addressed in compositions such as the Davidsbündlertänze, Op. 6 or Carnaval, Op. 9.

The young Liszt was already a celebrated pianist when he experienced Niccolo Paganini for the first time at the age of 19. This was incentive enough to completely rethink his piano technique and led to exercises of unprecedented difficulty and completely new possibilities for playing the piano. Thus, the first ideas for Paganini Etudes can be found as early as 1832. Since Liszt often subjected his works to years of testing on the concert platform before putting them into print, his 6 Paganini Studies – dedicated to Clara Schumann – did not appear until 1838. This first version is still peppered with chicanes that in places overshoot the mark, which at the time only Liszt himself could effortlessly master in adequate tempi and which became partly obsolete through the constant development of the concert grand piano – especially its sonority.

Music more for private use, on the other hand, are the 16 Waltzes, Op. 39, which Brahms dedicated to Eduard Hanslick in 1866. Most of the amiable pieces were written a year earlier, but some probably even before 1865. In addition to the original four-hand version, Brahms himself made a two-hand version and even a simplified one in 1867. The work appears to be something in between a collection and a cycle: “Pieces that are loosely joined together like Schubert’s waltz sequences and yet put together with a firm sense of succession” (Hans Gál).