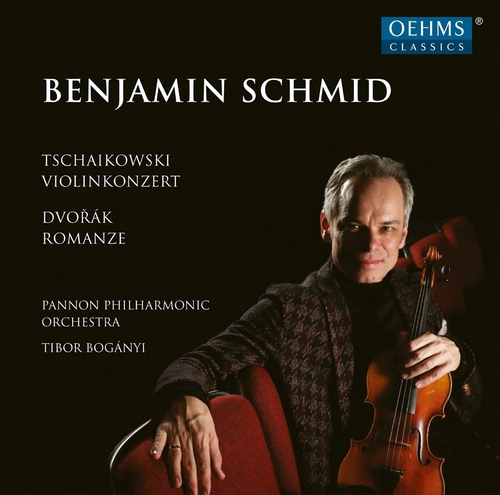 Antonin Dvorak:
Romance for Violin and Orchestra in F minor, Op. 11
Eduard Hanslick, the redoubtable critic of his time, found few propitious words to say at the occasion of the world premiere of Tchaikovsky’s Violin Concerto. According to him, the violin was no longer being played but „tousled, fleeced and beaten up“. Fortunately, he was nonetheless unable to hinder the triumphal march of Tchaikovsky’s only violin concerto.

Antonín Dvorák composed his Romance for Violin and Orchestra in F minor, Op. 11, sometime between September 1873 and early December 1877. The work received its premiere on 9 December 1877 in Prague. It was dedicated to the Czech virtuoso violinist František Ondrícek, „his dear friend“, himself also a composer and the soloist at the premiere of Dvorák’s Violin Concerto several years later.

OehmsClassics is delighted to be again releasing a CD with the exceptional Austrian violin virtuoso Benjamin Schmid after a long pause. Schmid is celebrating his 50th birthday this year – in honour of this occasion, the label will be issuing a set of 20 CDs comprising all of his OehmsClassics recordings. The release is planned for September.