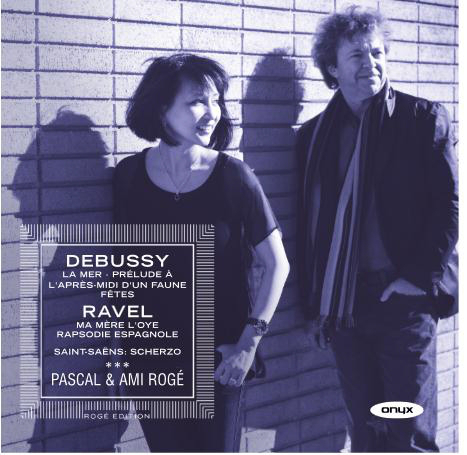 For his new ONYX CD Pascal is joined by his wife Ami for a programme of French masterworks for orchestra by Debussy and Ravel in arrangements for two pianos. The arrangement of La Mer is the Rogé’s own, the others are by the composers. The transcription by Maurice Ravel (1908) of Debussy’s Fetes in the words of the distinguished musicologist Maurice Hinson, ‘has been translated into the two-piano idiom with independent artistry [and] ranks with the best original writing in the two-piano medium.’ Unlike Liszt’s single-movement Spanish Rhapsody for solo piano, Ravel’s is a four-movement suite for two pianos: ‘Prélude a la Nuit’, ‘Malaguena’, ‘Habanera’ and ‘Feria’. It was written within the space of a few weeks in October but built around the ‘Habanera’ which had formed the first movement of his Sites articulaire of 1895. Its recycling may have had something to do with Ravel’s resentment at being accused of plagiarising a passage from Debussy’s ‘La soirée dans Grenade’ of 1903 written in the same key with a habanera rhythm and a similar use of an insistent C sharp clashing against the harmonies.

Ravel pointedly attached the date ‘1895’ underneath his ‘Habanera’ in the two-piano score of Rapsodie espagnole and the orchestral version which he prepared in the early months of 1908.