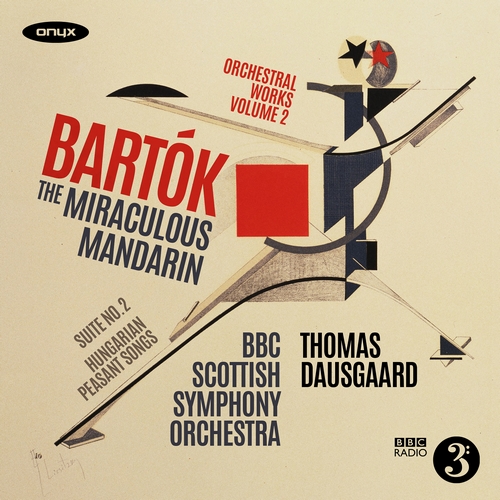 Onyx - ONYX 4213
Kompozytor
Bela Bartok (1881-1945)
Wykonawcy
BBC Scottish Symphony Orchestra / Thomas Dausgaard
The Miraculous Mandarin - Complete balet, Sz 73
Suite No. 2, Sz 34
Hungarian Peasant Songs, Sz 100
Bartok composed the Miraculous Mandarin (published as ‘A Pantomime in One Act’) at a time of violent unrest in Hungary. The unpleasant Soviet Hungarian Republic had collapsed in 1919 and was replaced by an ultra nationalist regime which persecuted communists, Jews, leftists and left over 1500 dead and thousands imprisoned without trial. It is against this bloody political and social backdrop that the composer, recovering from Spanish Flu, set about a music depiction of Lengyel’s ‘pantomime grotesque’. Prior to this period, and after the large- scale Suite No.1 of 1905, Bartok commenced work on a second suite. Smaller in scale than No.1 it is imbued with the folk music he had been studying. It was premiered in 1910. Bartok was spared service in World War I after failing several medicals. He spent the war years collecting folk songs some of these provided material for the Hungarian Peasant Songs, which he returned to in 1933 and orchestrated. This album is the second in a survey of all the composers works for orchestra by Thomas Dausgaard and the BBC Scottish Symphony Orchestra.
Recording: City Halls, Glasgow, Scotland, 3 & 4 March 2017 (1–17) and 21 & 30 September 2018 (18–21)