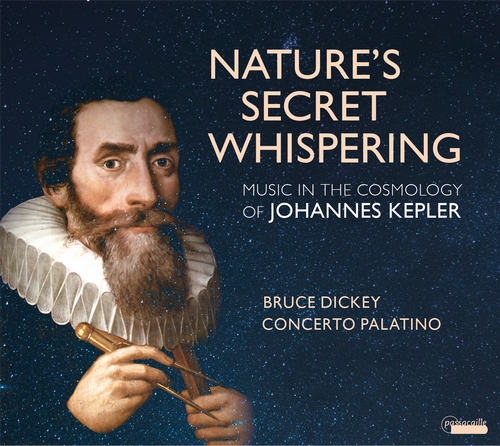 Erasmus Widmann:
Intrada and Canzon a 5

Lambert de Sayve:
O quam suavis est a 12 /
Johannes Kepler (1571 - 1630), the great mathematician and astronomer, was very much concerned all of his life with the connection between practical music and cosmology. He felt strongly that music mirrors the cosmos and used phrases such as “the Song of the Earth” and “Nature's secret whispering”. He broke from his contemporaries who thought that the motions of the planets and other heavenly bodies actually made sound, but thought that those motions and all of the geometry of the heavens were reflected in the most perfect polyphonic pieces of his time.Concerto Palatino proposes a program centered on the ideas of Johannes Kepler and the music of his lifetime. Taking Tui sunt coeli by Orlando di Lasso as a point of departure the group explores other polyphonic and polychoral music of Lasso and his contemporaries (Andrea Gabrieli, Lambert de Sayve, Hans Leo Hassler, etc.). In addition, they commissioned a new work for the project by the renowned composer Calliope Tsoupaki. Her new piece is called ASTRON (to the stars) and is based on a Delphic Hymn. For this project, Concerto Palatino was joined by a truly “star-studded” lineup of singers: Hana Blažíková and Barbora Kabátková, sopranos; Alex Potter, countertenor; Benedict Hymans and Jan van Elsacker, tenor; Tomáš Kral, baritone; and Jaromir Nosek, bass.
Recording: AMUZ, Antwerp, Belgium, 11-14 November 2019.