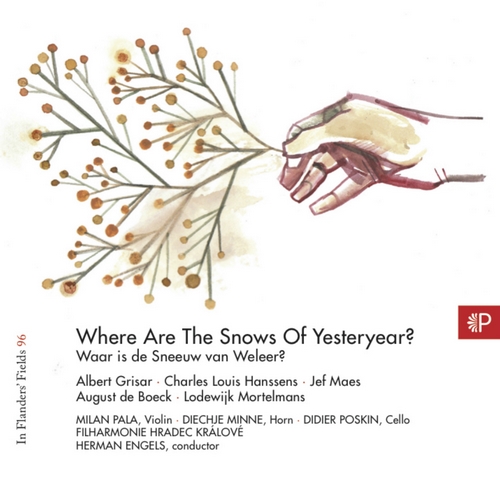 Boeck / Mortelmans / Hanssens: Where Are The Snows Of Yesterday?

Lodewijk Mortelmans:
Treurdicht (Elegie nr.4) for Orchestra
Lyrische Pastorale for Horn and Orchestra
Romanza for Violin and Orchestra
This CD intends to present a kaleidoscopic survey of over eighty years of orchestral music in Flanders, ranging from music for chamber orchestra via concertante music to the overture of an opera.

The historical opera Le carilloneur de Bruges is an outlier in the operatic production of Albert Grisar (Antwerp 1808 – Asnieres 1869), who was quite successful in Paris around the middle of the 19th century, especially as a composer of opéra bouffe. The subject may have been Flemish, but the libretto was by Jules-Henry Vernoy de Saint-Georges (1799–1875), a French author who dominated theatrical life in Paris in the 1830s, together with Eugene Scribe (1791–1861). The plot of Le carillonneur de Bruges, a three-acter, takes place in Bruges in 1566, during the Spanish rule of the Low Countries. The principal part is that of the old carilloneur Mathéus Claës and his bells. Both Grisar and his librettist appeal to Flemish nationalism as well as Belgian patriotism. The opera ends in an anachronistic tribute to the Flemish flag, and is dedicated to Leopold I, King of the Belgians. It was premiered on February 10, 1852, in the Paris Opéra-Comique, and no expense was spared. Like Beethoven did in his Egmont overture, Grisar’s overture outlines the plot, starting with a slow, ominous introduction and ending in an enthusiastic transformation of what would have been a tragedy into a triumphant finale, with the tribute to the Flemish flag. Grisar reveals his gift for striking melodies and uses “Rossini crescendos” effectively.
Recording: Concert Hall Filharmonie Hradec Králové (CZ), 12–16 June 2017