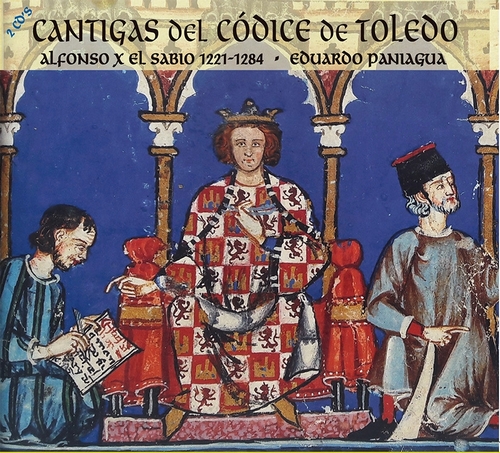 CD 1:
CSM 1, The Seven Joys
CSM 16, One Hundred Ave Marias a Day, Betrothal Versus Promise
CSM 15, Emperor Julian, Miracle of St. Basil
CSM 3, Theophilius' Letter
CSM 5, Empress of Rome
CSM 74, The Painter of the Virgin
CSM 405, The Cloth at Blanchernas in Constantinopole
CSM 56, Five Roses, Five Psalms
CSM 58, The Nun and The Dream of the Well
CSM 65, Hermit of Alexandria
CSM 21, The Child of Sterile Woman
CD 2:
CSM 33, Pilgrims to Jerusalem in Acre, The Four Elements
CSM 45, The Bad Knight Builder of a Monstery
CSM 13, Elbo Honest Bandit
CSM 67, The Man Who Had the Devil as His Servant, Under Nero
CSM 404, Cured by the Milk of the Virgin
CSM 115, The Boy and the Hermit of the Black Mountain
CSM 75, The Rich Man and the Poor Widow
The Cantigas de Santa María, composed by Alfonso X, king of Castile and Leon, form a collection of monodic songs, written in the medieval Galician-Portuguese language and in mensural notation, in honour of the Virgin Mary. They sing of her virtues and narrate the miracles performed through her intercession.

There are four original manuscripts of the Cantigas: one originally from Toledo Cathedral’s Chapter Library, today in the Spanish National Library, known as the Toledo Codex, two preserved in the Monastery of San Lorenzo de El Escorial and one in the National Library of Florence. In a first phase, the Toledo Codex was composed with one hundred ‘songs’ to the Virgin Mary, as if it were a book of courtly love songs or an Andalusi diwan. The musician and poet king, as Mary’s troubadour, dedicated the codex to the great Lady in the hope of being rewarded with her help to reign well in her lands and obtain her love in Paradise.

The project entered a second phase when it reached 200 cantigas with the Codex Rico (Rich) of El Escorial, which incorporated a visual narration with miniatures into the poems and music. At some point in time, the project was increased by the 200 new cantigas in the Codex of Florence, and the Musicians Codex was composed as an anthology making a total of 400 cantigas. The project continued until the death of the king, and a total number of 427 cantigas have been preserved.
Recorded in 2020/2021 in Madrid by Hugo Westerdahl and Pablo Villuendas