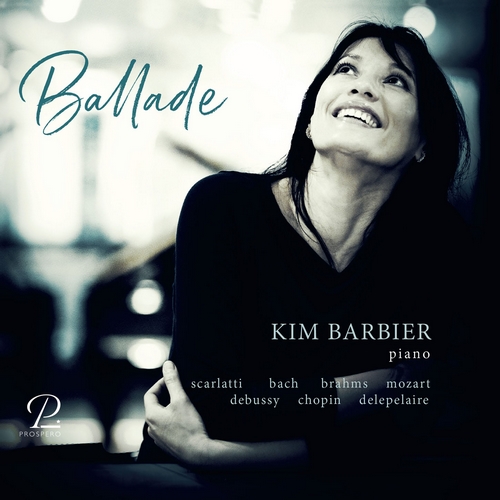 Brahms:
Intermezzo, Op. 118 No. 2
French pianist Kim Barbier does not see herself to be a person or an artist who is restricted by borders, be they linguistic, cultural or geographical. On the contrary, despite training at the Paris Conservatoire, which gave her a special familiarity with French composers such as Debussy, Dutilleux, Fauré and Poulenc, her career has been marked by a variety of emphases without being limited to specific preferences. Within the framework of classical music, she feels no commitment to any particular style, epoch or work, and would find it difficult to name any out-standing composers who did not interest her.

This is one reason given as to why she has lived in Berlin for a many years. She appreciates the quality, internationality and openness of its musical world, where she has found so many opportunities for creative expression and further development. This is particularly true of a long- standing collaboration with musicians from the Berlin Philharmonic Orchestra. She remains closely connected to the local music scene through these colleagues, especially in the field of chamber music, while at the same time pursuing wide- ranging international concert activities beyond Berlin.

The present selection of piano pieces represents the versatility of Kim Barbier’s skills, experience and interests across a broad musical spectrum. In some cases, these have shaped her biography and are associated with key experiences in her life and career. At the same time, the sequence of compositions represents stations in the development of European music history from the Baroque to the Classical Modern periods. The juxtaposition creates a dialogue that reveals both connections and influences, while resulting in a sovereign musical narrative that is neither strictly nor formally bound. This is inferred by the title Ballade with its reference to the troubadour lyric, a genre that originated in France and was also popular in Germany during the Middle Ages.
Recording: SRF Radiostudio Zürich, Switzerland, 2021.