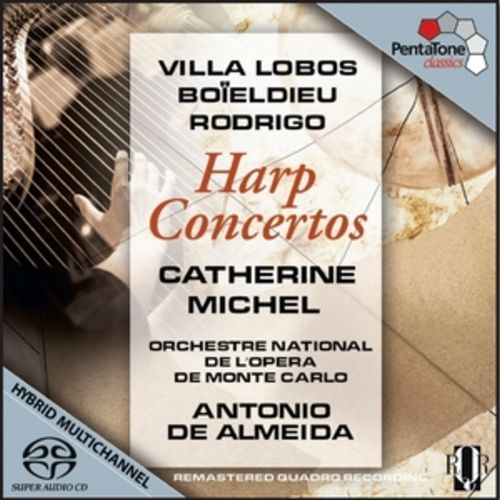 Boieldieu:
Concerto for Harp and Orchestra

Rodrigo:
Concerto Serenade for Harp and Orchestra
Antonio de Almeida was born to a Portuguese mother and American father, who emigrated to Argentina when he was young. There he studied theory and composition with the composer Alberto Ginastera, and cello with Washington Castro. Subsequently he was a pupil of Paul Hindemith at Yale University. He worked for two seasons at Tanglewood with Serge Koussevitzky and then with George Szell and Leonard Bernstein, going on to play horn, bassoon, oboe, clarinet and cello in several student orchestras. In 1945 he founded the MIT (Massachusetts Institute of Technology) Symphony Orchestra in Boston, and in 1947 the Chamber Orchestra of New Haven. Almeida then worked in Mexico before becoming head of the opera department at the University of Los Angeles in 1953. His conducting career soon developed in Europe: between 1957 and 1960 he directed the Symphony Orchestra of Radio Lisbon in Portugal; during the following decade he led the Stuttgart Philharmonic Orchestra for the 1963–1964 season; and he went on to work at the Paris Opera between 1965 and 1967. Returning to the USA as principal guest conductor of the Houston Symphony Orchestra between 1969 and 1971, Almeida was subsequently also musical director of the Friends of French Opera, New York. From 1976 to 1978 he was music director of the Nice Philharmonic Orchestra in France.

Antonio de Almeida’s career was now international in scope, with many guest engagements with front-rank ensembles such as the Chicago, Philadelphia and San Francisco Symphony Orchestras in the USA, and the Royal Philharmonic and Berlin Philharmonic Orchestras in Europe, amongst many others. In 1992 he took up his last permanent post, as music director of the Moscow Symphony Orchestra, a position that he held until his death in 1997. His repertoire was extremely catholic, although with a distinct bias towards French music. He prepared a thematic catalogue of the music of Offenbach and conducted the first complete reconstruction of the original score of Les Contes d’Hoffmann. He also edited a complete edition of the symphonies of Boccherini. For his services to French music he was made a member of the Légion d’honneur.

On record Almeida championed the unknown, making the first recording of Bizet’s opera Le Docteur Miracle. Towards the end of his life he conducted the Moscow Symphony Orchestra in many significant premiere recordings of music by Sauguet, Castillo, Tournemire and Malipiero, for the Marco Polo label. Other highlights of his recorded repertoire include a set of rarely performed symphonies by Haydn for the Haydn Foundation; fine accounts of the operas La Juive (Halévy), Mignon (Thomas), Le Calife de Bagdad (Boieldieu) and L’infidelta delusa (Haydn); music by Lalo, Schmitt, Chausson, Dukas and Duparc; and the complete operatic ballet music of Donizetti and Rossini. His performances were always assured, and in French music in particular possessed style and sensitivity.