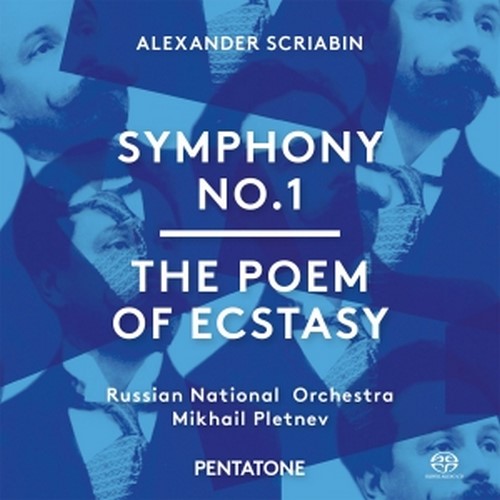 Scriabin: Symphony No. 1 & The Poem of Ecstasy

Symphony No. 1 in E Major, Op. 26
The Poem of Ecstasy, Op. 54
In 1899, Scriabin began writing his most ambitious composition to date: the First Symphony. The work still reflects the influence of the traditional four-movement formal scheme. The first movement, in sonata form (Allegro dramatico), is followed by a slow movement (Lento), a scherzo (Vivace) and an Allegro, again in sonata form. But Scriabin also framed the symphony with an introductory movement in a slow tempo and a monumental choral finale with a text of his own composition, and it is this movement that can be said to occupy the work’s interpretational centre of gravity. The First Symphony documents a search for salvation and unification, both of which can only be found in art: “May your mighty and free spirit reign all-powerfully on earth; and humanity, lifted up by you, perform a noble deed. Come all nations of the world and let us sing praises to art!”.

Le Poeme de l’extase debuted in New York on 10 December 1908, after a performance in Russia had to be cancelled due to the difficulty of the score. However, when the Russian premiere finally did take place, on 1 February 1909, it wound up being a true spectacle. The then young composition student, Sergei Prokofiev wrote, “Myaskovsky and I sat next to each other and consumed the Poeme de l’extase with the greatest of interest, although, at different moments during the performance, we were entirely confused by the newness of the music. We had expected something surpassing the divine Poeme, which we both knew well and loved. But both the harmonic and thematic material of the work, as well as its contrapuntal voice-leading, resembled nothing we had ever heard before.”

Conductor Mikhail Pletnev surpasses the extreme with his Scriabin interpretation and draws what he needs from the Russian National Orchestra ? the Moscow-based ensemble he founded in 1990. This results in a near perfect performance of both works. Blessed by the orchestra’s warm, vibrant playing, this CD is a real pleasure for everyone who adores the esoteric and unorthodox work of Scriabin. It is definitely THE Symphony No. 1 and Poem of Ecstasy to own: an ideal performance with sonic audio quality to match