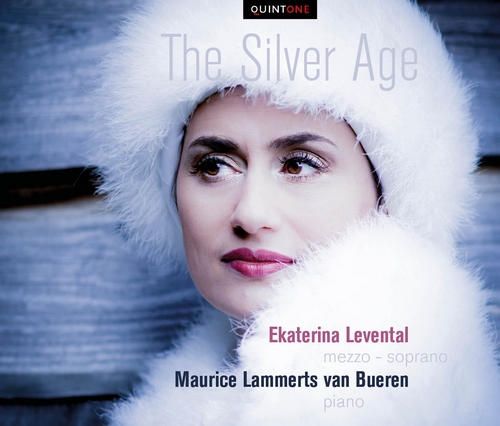 Modest Mussorgsky:
Songs and Dances of Death
Ekaterina Levental, born in Tashkent, the capital city of Uzbekistan, one of the republics of the former Soviet Union and now living and working in Amsterdam, presents an impressive anthology of the finest and most delicate songs of the late Romantic period of the so-called Russian Silver Age. The co-operation with pianist Maurice Lammerts van Bueren results in an enchanting program of breathtaking beauty.

The CD comes with a 32 p. booklet containing the original Russian songtexts and a translation into English. The booklet opens with a thorough analysis of the style period by Professor Dr. Francis Maes (University of Ghent), which starts as follows:

“Tchaikovsky was temperamentally different from such Romantics as Byron and Beethoven. He lacked their grandness of ego and their heroic, passionate exuberance. His nature, owing in large part to his family upbringing, was more “sentimental” in Friedrich Schiller’s sense, which was still widespread in music, literature, and the other arts all over Europe in the latter nineteenth century. It is no accident that Tchaikovsky’s music found acceptance and popularity toward the end of the century.” In these words Alexander Poznansky, an eminent biographer of Tchaikovsky, not only defines the emotional content of the composer’s music, but also offers an explanation of why Tchaikovsky’s music achieved such popularity in the time of the fin de siecle. In Russia this period is known as The Silver Age, to denote the final flourish of Tsarist Russia. During this period, artists and opinion leaders started to distance themselves from the realistic ideals and social involvement that had defined the years 1860-70. The musical representative of this trend had been Modest Mussorgsky. From the start Tchaikovsky had stood apart from Mussorgsky and the circle he belonged to the Moguchaya Kuchka, the ‘mighty handful’ of composers around the central figure of Mily Balakirev on account of his vision of music being the language of emotion and the idealistic instrument of beauty. Had he not died prematurely in 1893, Tchaikovsky would have become the figurehead of the Silver Age in music. After his passing, it was the young Sergei Rachmaninoff who took over his role. He guided Tchaikovsky’s elegant culture of sentimentality to its final heights, before the Russian Revolution put a definite end to the entire period".