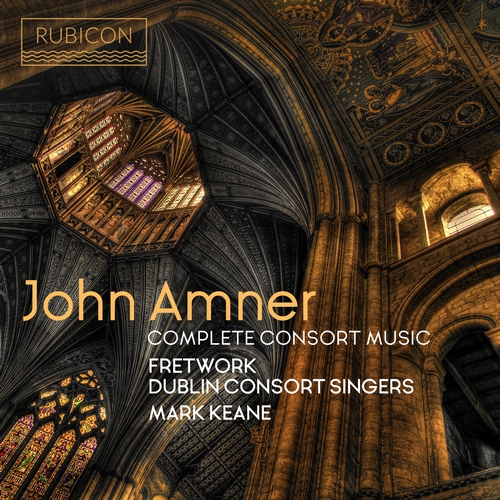 Love we in one consenting
Let false surmises perish
Away with weak complainings
O come thou spirit divinest
O love beseeming well
Distressed soul
Sweet are the thoughts
Come let's rejoice
Saint Mary now
At length to Christ
But he the God of love
Woe is me
Remember not, Lord, our offences
Thus sings the heavenly quire
The heavens stood all amazed
Now doth the city remain solitary
He that descended man to be
I will sing unto the Lord
O ye little flock
Fear not
And they cry
Lo, how from heaven
I bring you tiding
A stranger here
My Lord is hence removed and laid
An Elegy in Memory of Master Thomas Hynson
Pavan
Gaillard
Consider, all ye passers by
I am for peace
John Amner was born and died in Ely, Cambridgeshire and worked for the greater part of his life at Ely Cathedral, as a boy chorister and later as informator choristorum. He succeeded some of England’s finest composers such as George Barcroft, John Farrant and Christopher Tye. He received his Bachelor of Music from Oxford with the support of the Earl of Bath in 1613, and also from Cambridge in 1640.

Although not a ‘celebrated ‘ composer of the Renaissance era, the music in Amner’s Sacred Hymnes shows that he was capable of writing in a number of styles from three-voice conzonets through to elaborate consort anthems of multiple voices in the verse sections. Also on this fascinating album is his five part Pavan and Galliard Amner’s only surviving works for viol consort which represents an indication of a broader compositional output of instrumental music by the composer.

Amner has been seldom recorded, and this meticulously and lovingly curated album represents an important addition to the understanding of both the composer and the provincial religious music scene in England in the first half of the 17th century.
Recorded in West Road Concert Hall, Cambridge, 23 & 24 April 2018