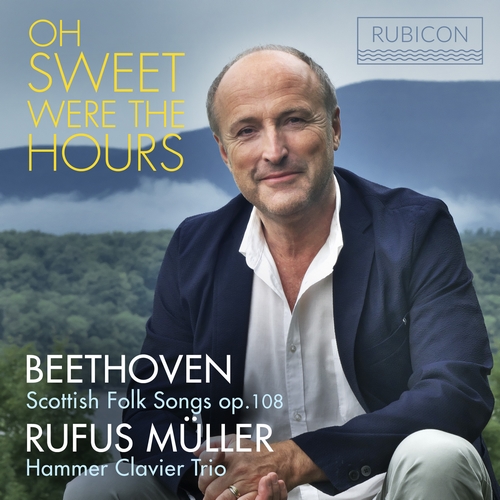 Sally in Our Alley, Op. 108/25
Maid of Isla, Op. 108/4
Could this Ill World, Op. 108/16
Oh Mary, at thy window be, Op. 108/17
Sunset, Op. 108/2
Sympathy, Op. 108/10
Oh, had my fate, Op. 108/12
The Shepherd’s Song, Op. 108/23
The lovely lass of Inverness, Op. 108/8
Enchantress, farewell, Op. 108/18
Faithfu’ Johnie, Op. 108/20
Polly Stewart, WoO156/7
Oh! Sweet were the hours, Op. 108/3
Again, My Lyre, Op. 108/24
Bonnie Laddie, Op. 108/7
George Thomson, an enterprising collector and publisher based in Edinburgh, reached out beyond domestic British talent, to (among others) Haydn, Carl Maria von Weber and Beethoven to continue the work established by Joseph Haydn and William Napier in the 1790s. Always attracted to potential publishing exploitation, Beethoven took an avid interest in what Haydn’s folksong venture had begun; and an appealing additional incentive was the commission fee. Haydn’s rate had been a British pound per song – about L138 in today’s money – a detail which Beethoven made known in negotiations with Thomson. However, as Beethoven biographer Barry Cooper suggests, the composer also sensed beyond monetary compensation the perennial power of the folk-melody and the potential ensuing benefit of his own musical association with the project, so as to create with Thomson a folksong movement for future generations”. Beethoven delivered the challenging arrangements and Thomson struggled to sell them, asking Beethoven if he could simplify his arrangements. Beethoven’s wonderfully dusty response was ‘I am not accustomed to retouching my compositions: I have never done so, certain of the truth that any partial change alters the character of the composition. I am sorry that you are the loser, but you cannot blame me, since it was up to you to make me better acquainted with the taste of your country and the little facility of your performers’