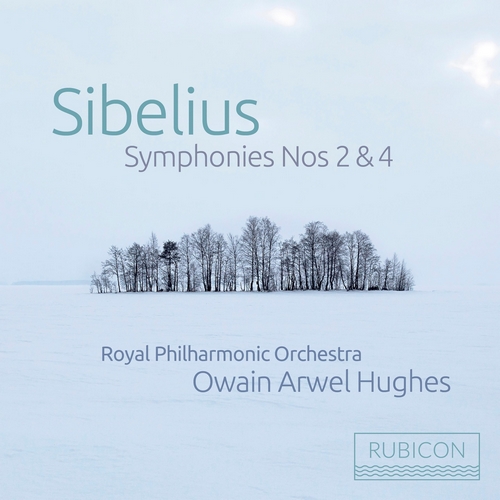 Symphony No. 2 in D major, Op. 43
Symphony No. 4 in A minor, Op. 63
Sibelius’s 2nd symphony of 1902 represents a big step forward in his development as a symphonist. The presence of Tchaikovsky in the 1st symphony has receded, and the big themes, though present, are not so much big statements, but thematic fragments driven by harmonic tensions through which the composer takes the listener on an eventful journey. The tensions are resolved in the opening movements trumpet -capped brass chorale and the finale’s exhilarating hymn-like assurance of the bracing ‘big tune’.

In contrast to the Italianate warmth of the 2nd (its composition started during a holiday in Italy), the 4th symphony of 1907 inhabits a bleak, dark, emotionally fraught landscape. Sibelius had been diagnosed with a cancerous throat tumour and feared for his life. After a successful operation to remove it, he lived in fear of its return. He gave up both whisky and cigars and suffered awful withdrawal symptoms. Battling with his demons and self-doubt, and no longer cocooned by the effects of his heavy drinking and smoking, the result was an outpouring of honestly expressed emotions ‘You must pull yourself together. If only I could rid myself of these dark shadows. Or at least put them into some new perspective. If you can’t do that, put the past behind you. You mustn’t go under, there’s too much on the plus side’ . The 4th symphony is one of the greatest symphonies ever composed. With not a superfluous note in sight, spare and forbidding, it is a searingly personal and emotional journey into the darkest effects of depression.
Recording: St John’s Smith Square, London, 7–9 June 2021