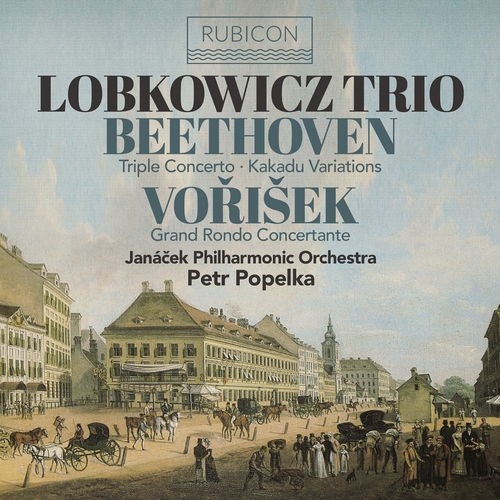 Beethoven’s Triple Concerto is his take on the old 18th century Sinfonia Concertante. Dating from 1803/4 it is from the particularly productive period that saw the appearance of the 3rd Symphony ‘Eroica’, the ‘Waldstein’ and ‘Appassionata’ piano sonatas, and the preliminary sketches for ‘Fidelio’ (at that time called ‘Leonore’). Originally intended as a piece for his pupil Archduke Rudolph, Beethoven made the piano part simpler than the piano concertos, and the work is unique in the history of the Sinfonia Concertante in that it includes a piano. The three instruments all have such different tone production and Beethoven’s genius is apparent in the tonal contrasts between the instruments and with the orchestra. Not only are the three soloists pitted against the orchestra, but they also play off against each other, functioning as a true piano trio.

Beethoven’s last published piano trio is the set of variations from 1813 on a popular theme from a singspiel by Wenzel Mu¨ller ‘Ich bin der Scheider Kakadu’. Beethoven’s invention, as so often in his variations is brilliant.

Jan Václav Voříšek was a younger contemporary of Beethoven and was a practising lawyer. He settled in Vienna, met Beethoven and studied with Hummel, which greatly improved his piano playing, but he failed to obtain employment as a musician. He produced a masterful symphony in D, and the delightful and elegant Rondo Concertante on this album. He was friends with Schubert and sadly like Schubert died tragically young.
Recording: City of Ostrova Cultural Centre, Ostrova, Czech Republic, 26–30 April 2021.