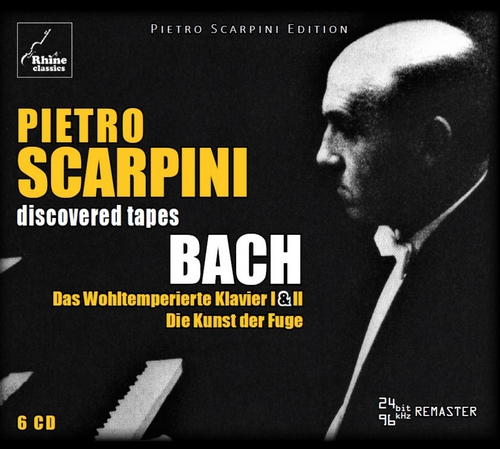 CD 5-6:
Die Kunst der Fuge, BWV 1080
The Italian pianist Pietro Scarpini, born in Rome on 6 April 1911, first studied piano with his mother before going to the Accademia di Santa Cecilia at twelve. There his teachers were Alfredo Casella for piano, Bernardino Molinari for conducting, Alessandro Bustini and Ottorino Respighi for composition and Fernando Germani for organ. Starting from his Italian debut (2.XI.1936), playing Mozart Concerto K.271, Mario Medici Piano Concerto and Rachmaninoff Paganini Rhapsody under Bernardino Molinari with the Orchestra Stabile della Regia Accademia di Santa Cecilia at the Teatro Adriano in Rome, immediately followed by appeareances with the Berlin Philharmonic Orchestra, he has been heard all over Europe. In the 1930’s he collaborated also with Paul Hindemith during his Italian tournées. He was keenly interested in chamber music and in 1947 founded the “Pierrot Lunaire ensemble” which gave thirty concerts of Schoenberg’s work in Salzburg, Milan, Rome, Florence and in other musical centres in Europe. During World War II he refused to play under the Fascist and Nazi regimes, and in 1954 he made his first trip to America to appear with the New York Philharmonic Symphony Orchestra, under Dimitri Mitropoulos playing Prokofiev 2nd Concerto, followed by a second tour in 1955 where he played Mozart Piano Concerto No.22 K.482 (Rhine Classics RH-010). He gave many first performances of works by modern composers, including Ghedini, Dallapiccola, Sessions, R. Malipiero, Peragallo and Petrassi, and in 1948 the first Italian performance of Schoenberg Piano Concerto in Turin. Scarpini’s versatility defies any classification: audiences who have heard him playing Beethoven Concerto No.4 under Furtwängler have seen in him the true interpreter of the classics; those who have attended his performances of contemporary music believed that he was perhaps the only pianist able to do full justice to the moderns. He has mastered works such as Bach “The Well-Tempered Clavier”, “The Art of Fugue” and the “Goldberg Variations” (in Busoni’s version) or Beethoven “Diabelli Variations” and at the same time devoted full recitals to the work of Busoni and Scriabin.
Recordings: studio RAI, Roma, 3-5 January 1961 (CD 1-2); Scarpini home studio, Roma, 1975/76 (CD 3-5); Scarpini home studio, St. Moritz, 23 February 1976 (CD 5-6) - Piano: Bechstein.