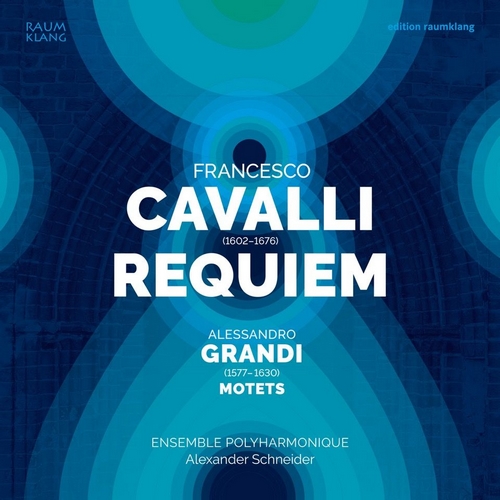 Alessandro Grandi:
Motets and Sacred Concertos
When Venetian opera experienced its true blossoming in the mid seventeenth century, Cavalli’s works numbered among the main attractions. Indeed, he was one of the most productive composers in the city on the lagoon, and his works greatly influenced the still young genre. However, apart from his almost thirty preserved operas, he was also prolific in the area of church music. As a singer, organist, and, from 1668, maestro di capella, he remained closely linked to Saint Mark’s Basilica his entire life, composing Masses, vesper cycles, and oratorios. The Requiem was composed toward the end of his life as a personal funeral Mass. Cavalli left behind precise instructions for the organization of his funeral ceremony. The work was to be performed by an opulent ensemble and repeated twice a year in honor of his memory. However, his Missa de profundes soon fell into oblivion. On this touching recording, Ensemble Polyphonique, under the direction of Alexander Schneider, has complemented Cavalli’s Requiem with motets and sacred concertos by Alessandro Grandi, who was likewise active at Saint Mark’s in Venice. The innovation and theological-philosophical sophistication of Cavalli’s Requiem endures in its epoch-spanning impact. The music of this piece takes us musically to the time of the late Renaissance, shows us the High Baroque, and looks ahead to the era of sentimentalism.