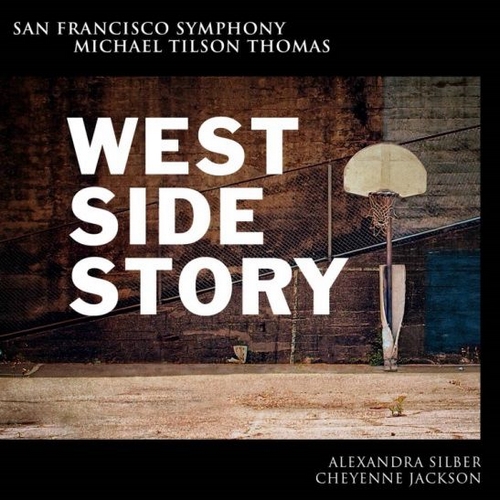 Music Director Michael Tilson Thomas (MTT) and the San Francisco Symphony (SFS) will release a new live recording of the first-ever concert performances of Leonard Bernstein’s complete score for the musical West Side Story featuring a stellar Broadway cast including Cheyenne Jackson and Alexandra Silber, and the San Francisco Symphony Chorus, on 9 June 2014. This collector’s edition two-disc set available from the SFS Media label and distributed in the UK via AVIE Records, includes a 100-page booklet featuring a new interview with MTT, notes from Rita Moreno and Jamie Bernstein, as well as a West Side Story historical timeline, archival photographs, complete lyrics, and rehearsal and performance photos. This audiophile SACD recording, playable on both standard CD and SACD devices.

The performances were recorded live at San Francisco’s Davies Symphony Hall in late June and early July 2013 after Michael Tilson Thomas and the San Francisco Symphony became the first orchestra to receive permission from all four West Side Story rights-holders to perform and record the musical score in its entirety in a concert setting. Of the new recording, Michael Tilson Thomas said, “This is a new and rare opportunity to hear Bernstein’s complete score sung by a sensational young cast and a knock-your-socks-off orchestra. The San Francisco Symphony totally understands and feels this music. We show the Broadway roots of the piece and how its universal qualities translate into the way we think about it today.”

Making his San Francisco Symphony debut in West Side Story is Cheyenne Jackson (TV’s Glee, 30 Rock) singing the role of Tony. Of performing the role with MTT and the SFS, Jackson says, “I think this is the best musical of all time. Period. I’m a Broadway Baby, and I’ve done many, many shows. And there are a couple that come close, but when it comes to book, music, lyrics, West Side Story is absolutely timeless. Everybody knows every word. This isn’t a polarizing musical or something people have lukewarm feelings about, you just love West Side Story. Even after knowing the score all these years, I’m still uncovering things about the score I never heard before. So, to have the opportunity to perform it, under the great Michael Tilson Thomas, and also with this Symphony, how could I not?! ” The cast includes a host of exciting Broadway voices all making their San Francisco Symphony debuts including Alexandra Silber in the role of Maria, Jessica Vosk as Anita, Kevin Vortmann as Riff and Julia Bullock as A Girl. The recording also features members of the San Francisco Symphony Chorus as the Jets and the Sharks.

Of the performances, Jamie Bernstein said, “Michael really understands my father’s music - how to conduct it and how to bring it to life. It was such a treat to hear the entire score of West Side Story performed by the San Francisco Symphony on a stage. It is the greatest way to hear this music.”

Tilson Thomas first met Leonard Bernstein several years after the West Side Story premiere in 1957 and has championed the iconic composer/conductor’s music throughout his career. Highlights with the SFS include semi-staged performances of On the Town in 1996 and, in 2008, Carnegie Hall’s opening night all-Bernstein gala concert which was recorded and is available on DVD from SFS Media.
Recorded live at Davies Symphony Hall June 27-30 and July 2, 2013