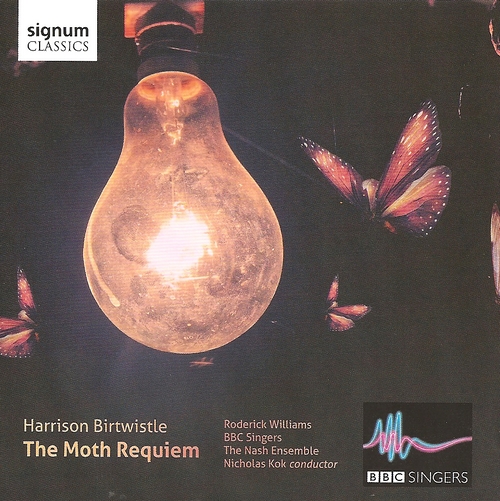 The Ring Dance of Nazarene
Three Latin Motets
Carmen Paschale
Lullaby
The Moth Requiem (2012)
As 2014 heralds the composer’s 80th year, Harrison Birtwistle remains one of the most popular voices in contemporary composition in the UK and beyond. This new collection of premiere recordings draws together recent commissions with older works to mark the occasion, with characteristically flawless performances from the BBC Singers under Nicholas Kok. They are joined on this disc by the Nash Ensemble and baritone Roderick Williams.

With two short seasonal pieces nested at its centre – one Easter- and one Christmas-related, one early and one recent – this disc might, if its composer were a more conventional figure, have been a survey of sacred choral music from a career now spanning fifty years. In fact it is rather less easy to categorise than that, even if we exclude from consideration the one work with apparently pre-Christian subject matter. But perhaps Harrison Birtwistle is not so unconventional a composer after all, and if there is little here that the Christian liturgy could accommodate, we are not so far away as one might at first think from Western sacred music’s themes (Christ’s life, death, and continuing life in us) and genres (hymns, motets, even a sort of requiem). Birtwistle’s music has always been concerned with memory, and here too, even as choral music’s traditional styles and functions fall away, we see him taking on a range of English and Latin texts in ways that engage withboth sacred and secular traditions of text choice and treatment. All of this gives his choral music a less ‘prehistoric’ slant than much of his instrumental and dramatic work, but Birtwistle is not one of those composers whose choral music seems to stand entirely separate from the rest of their output. Recognisably Birtwistlian concerns are present throughout this disc, and recognisably Birtwistlian sounds, too – particularly in the accompaniments, with their avoidance of bowed string instruments and concomitant focus on woodwinds, harp and percussion. Furthermore, all but the two shortest works here relate in some way to Birtwistle’s operas, either sharing their subject matter or setting words by one of their librettists. Birtwistle has tended, particularly in the last twenty years or so, to work repeatedly with certain favoured writers, and the two major recent works which frame this programme both use texts by writers with whom he had already collaborated on an opera. In the case of The Moth Requiem, as we shall see, it was to an earlier poem by that writer that he turned, whereas for The Ring Dance of the Nazarene – as is his more usual practice – he requested a new text from David Harsent, who had been the librettist for Birtwistle’s 1991 opera Gawain and who had also provided the text for The Woman and the Hare, for reciter and small ensemble. More recently the two have collaborated again on a further opera, The Minotaur, and a smaller dramatic work, The Corridor, and in 2012 Harsent provided the poems for Birtwistle’s first voice-and-piano song cycle, Songs from the Same Earth.