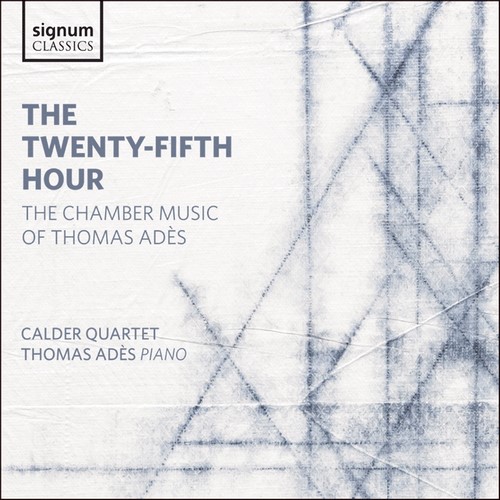 Ades:
Piano Quintet
The Four Quartets
Arcadiana
These three works are not only in classic genres but themselves becoming classics, with Arcadiana as close as any modern quartet to joining the repertory. The Calders included it on their debut album, between the Ravel and Mozart’s last quartet, and have played it often since. They have also been proponents of the Piano Quintet, with Gloria Cheng, and were the second team to play The Four Quarters, within a few months of its premiere.

Ades wrote Arcadiana in 1993 and gave it a favourite form, of several sound pictures, distinct and characterful, being drawn out of the same musical stuff, as if each were a different view through a kaleidoscope. ‘Six of the seven titles’, he has noted, ‘evoke various vanished or vanishing 'idylls'. The odd-numbered are all aquatic, and would splice if played consecutively.’

In the first movement the viola is a gondolier poling through the other instruments’ moonlit water, with shreds of shadowy waltz drifting in now and then. Next, under a quotation from The Magic Flute (‘That sounds so delightful, that sounds so divine’ sing Monostatos and the slaves when Papageno plays his bells), comes a song for the cello under glistening harmonics. The music is stopped twice in its tracks by major chords, and slips away whistling something from the Mozart score. ‘Auf dem Wasser zu singen’ ('To be sung on the water') takes its title and a figuration from a Schubert song, though here the song is Ades’s own, over which water seems to be falling in drops, with increasing antagonism between the elements.

The tango centrepiece the non-idyll relates to Poussin’s paintings in which shepherds in a classical landscape make out the inscription on a tomb: ‘Et in Arcadia ego’, which could be understood as voiced by the deceased ('I too was in Arcadia') or by Death ('Even in Arcadia I am there'). Like those paintings, Ades’s Arcadian sequence at once beguiles and threatens, not least here, in what is its longest section. Still in the Louvre, the following movement relates to Watteau’s ‘L’Embarquement pour Cythere’ ('Boarding for Cythera', an island sacred to Aphrodite) and changes darkness to light, with high cadences and song phrases turning into water music that splashes out from Debussy’s response to the same picture, L’îsle joyeuse. From Venice, Vienna and Paris, ‘O Albion’ comes to England for a meditation on ‘Nimrod’ from Elgar’s Enigma Variations. (The first performance of Arcadiana was given at the Cambridge Elgar Festival.) Lethe, in Greek mythology, is the river of forgetting, as Ades remembers in the trajectory of his cello song, taken up by the other instruments and gradually lost.