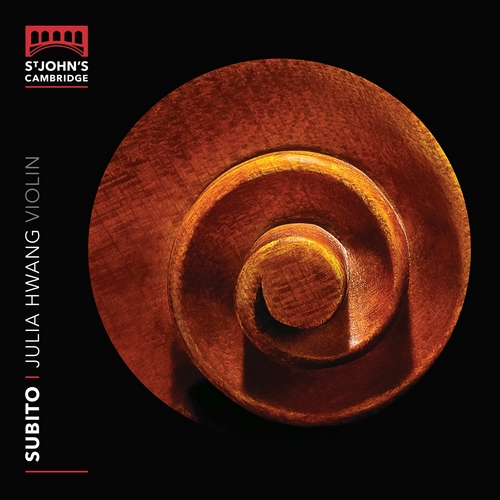 Henryk Wieniawski:
Fantaisie brillante sur des motifs de l’Opéra Faust de Gounod, Op. 20
Subito: suddenly, or immediately. And something else besides – a moment of revelation or transformation, charged with surprise. When Witold Lutosławski gave this title to the showpiece that he wrote for a violin competition in Indianapolis in 1994, he evoked all these qualities, and more – that delighted astonishment; the brilliant, piercing moment of musical communion between performer and listener that comes with true virtuosity. On her debut disc, Julia Hwang has taken that idea – of virtuosity as communication – and embraced it from four very different directions. Grieg’s Violin Sonata No. 3 blends virtuosity with traditions both local and international, to say something unambiguously personal. Vaughan Williams The Lark Ascending refines violin technique into expression as pure as the song of a skylark. Lutosławski’s Subito creates a brief, dazzling moment whose very brilliance is its own meaning; and Henryk Wieniawski, entertainer par excellence, spins fantasy from another man’s tunes in his Fantaisie brillante sur des motifs de l’Opéra Faust de Gounod – enriching them in the process. This disc continues Signum’s series of discs with St John’s College Cambridge, following their two critically-praised Choral CDs of 2016.
Recorded in the Britten Studio, Snape, Suffolk, UK from 26th to 28th September 2016