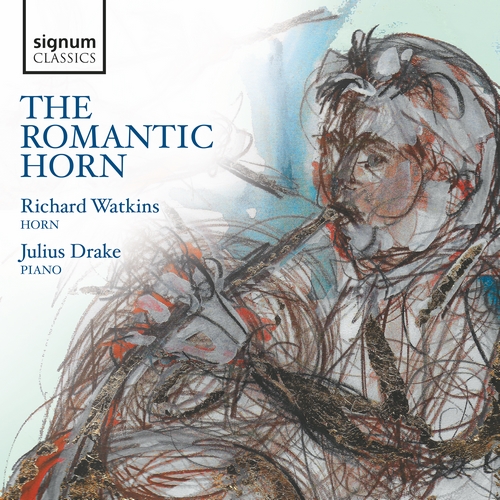 Gilbert Vinter:
Hunter’s Moon
This recording presents a selection of some of the most well-loved works for the horn. Titled The Romantic Horn, the works highlight the lyrical gems of the European repertoire for the instrument, with works by Beethoven, Schumann, Scriabin and Strauss (Richard and Franz).

Richard Watkins is one of the most sought-after horn players of his generation. He was Principal Horn of the Philharmonia Orchestra for twelve years, is currently a member of The Nash Ensemble and is a founding member of London Winds. His extensive discography includes recordings of concertos by Mozart, Malcolm Arnold, Reinhold Gliere, Ethel Smyth and Colin Matthews, as well as Mozart’s Sinfonia concertante and chamber music for horn by Schumann, Schubert and Poulenc.

The pianist Julius Drake lives in London and specializes in chamber music, working with many of the world’s leading artists, both in recital and in the recording studio. He appears regularly at all the major music centres, including the Aldeburgh, Edinburgh, Munich, Schubertiade, and Salzburg music festivals; Carnegie Hall and Lincoln Center, New York; Concertgebouw, Amsterdam; Philarmonie, Berlin; Châtelet and Musée de Louvre, Paris; La Scala, Milan; Liceu, Barcelona; Musikverein and Konzerthaus, Vienna; and Wigmore Hall and the BBC Proms in London.
Recorded in the Britten Studio, Snape Maltings, UK from 22nd to 24th March 2018.