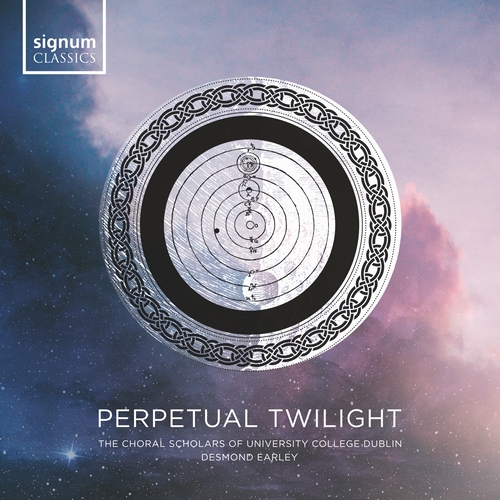 Robert Burns:
My Love is like a Red, Red Rose (arr. Eriks Ešenvalds)

Desmond Earley:
Body of the Moon

Timothy Stephens:
At that hour when all things have repose

Eoghan Desmond:
Oxen of the Sun

Colin Mawby/Desmond Earley:
Strings in the Earth and Air

Words:
Galileo Galilei, James Joyce, Patrick Kavanagh, Frank McGuinness, Frederic Weatherly, Amairgen Glúngel, Traditional or unknown
The Choral Scholars of University College Dublin and Artistic Director Desmond Earley follow up their debut release with a programme of new choral music inspired by the evocative imagery of the natural world in traditional Irish and Scottish folksong and poetry. The disc includes a number of world-premiere recordings of new works and arrangements commissioned by the choir. The choir’s first release Invisible Stars was praised by critics and reviewers:

“The choir’s singing is crystal clear” The Lady

“Blending ‘folk’ voices with choral precision and tight harmony isn’t easy, but Desmond Earley has a passionate stake in both and doesn’t put a foot wrong” Choir and Organ

The Choral Scholars of University College Dublin, under the artistic direction of Desmond Earley, is Ireland’s leading collegiate choral ensemble. With a large repertoire ranging from art to popular music, and stretching from the medieval to the contemporary in style, this choir gives many concerts throughout the academic year, both in Ireland and abroad.
Recorded in All Hallows College, Drumcondra, Dublin, Ireland, from 27th to 29th April 2018