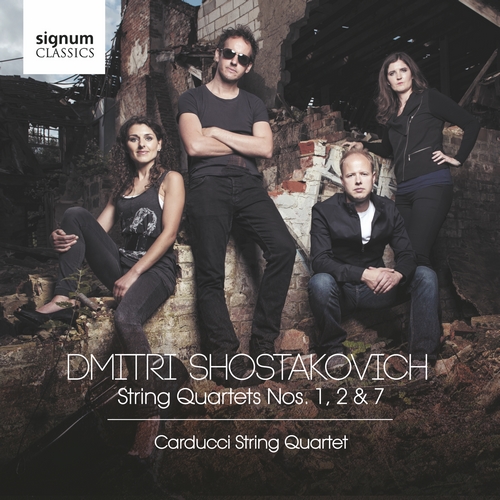 Described by The Strad as presenting “a masterclass in unanimity of musical purpose, in which severity could melt seamlessly into charm, and drama into geniality”, the Carducci Quartet is recognised as one of today’s most successful string quartets.

This disc contrasts Shostakovich’s first two string quartets with the seventh – composed in memory of his late wife Nina. In composing his quartets prior to No. 7, Shostakovich had scrupulously followed a predetermined sequence of keys: according to this, the work should have been in E flat major. However Shostakovich, significantly, chose to break this pattern by writing his new quartet in F sharp minor, the key associated with such anguished music as Peter’s remorse in Bach’s St John Passion, and – particularly close to Shostakovich’s heart – Mahler’s unfinished Tenth Symphony.
Recorded in Wyastone Concert Hall, Wyastone, Monmouthshire, UK from 12th to 14th June 2017