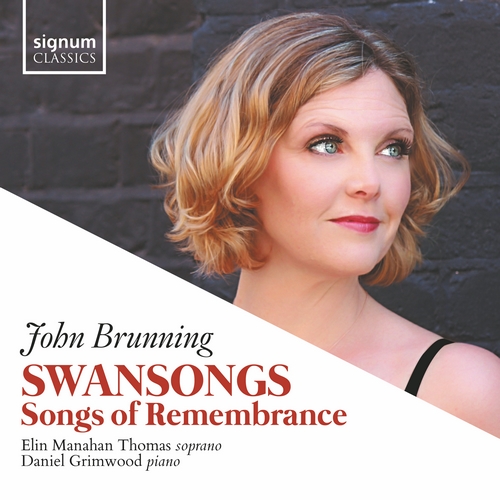 Sleep
When Poppies Fall
Father
I Live Again
Composer, musician and broadcaster John Brunning is perhaps best known for his choral work Pie Jesu. The piece was initially recorded by the vocal group ‘All Angels’, and there has since been around a dozen recordings including an a capella arrangement by The King’s Singers.

In his introduction to the disc, John Brunning writes: There are probably more euphemisms employed when speaking of death than any other subject. Take a walk around a graveyard and you will see any number of headstones bearing inscriptions such as ‘passed away’, ‘fell asleep’, ‘called to rest’, and so on. Yet death is the one inescapable certainty that each of us must ultimately confront. I have sought to address this issue in as positive a way as possible with my cycle, ‘Swansongs’.

Elin Manahan Thomas is one of the most versatile sopranos of her generation. Since releasing her début album Eternal Light in 2007 with the Orchestra of the Age of Enlightenment, she has performed at many of the world’s most prestigious venues, festivals and events, including the Royal Wedding of Prince Harry and Meghan Markle in May 2018. On this recording she is accompanied by pianist Daniel Grimwood, a performer of inte
Recorded in All Saints Church, East Finchley, London on 18th June 2018